Saturday 1 March 2008: The second national Freedom of Assembly protest gathered at the top end of Trafalgar Square in London. 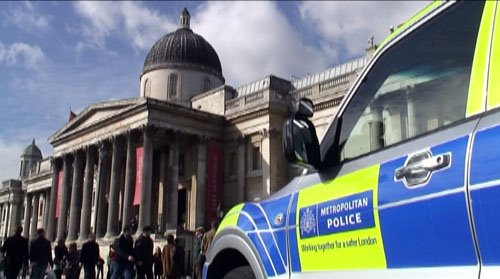 Following on from the FOA protest in January that saw several hundred protestors march and demonstrate illegally under the 2005 SOCPA Act, this time the turnout was surprisingly low, considering the current climate of protest, civil rights restrictions and police intrusions, sometimes violent, against protestors, journalists and the public.

The Serious Organised Crime and Police Act (SOCPA) was instigated in July 2005 to lay new laws in place for the Serious Organised Crime Association (SOCA), better known as the UK FBI. But deep in the legislation were sections 128 to 132 which first installed a designated one kilometre area around the Houses of Parliament. Once intiated protest in the zone was made illegal without prior police permission.

Since then SOCPA zones have sprung up across the country, around nuclear installations and other possible terrorist (or protest) targets, around UK and US military bases and even around animal research laboratories. This, the government said, would never happen. SOCPA, they said, was only introduced to protect parliament from terrorist attacks.

As with the 2000 anti-terrorism laws, that the government promised would not hamper the right to protest, as soon as the laws were in place the first to be directly affected were the various protest movements, especially protests against the DSEi weapons convention at the ExCel centre in Docklands every two years.

In the last year this journalist has noted the SOCPA Act being used in random streets across the country and designated “free speech” zones appearing, from Wood Green, London, to my home town of Peterborough – free speech zones insinuating that outside that zone you are not allowed to protest or demonstrate your right to public assembly. 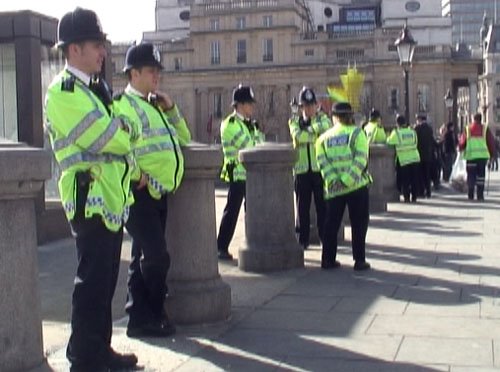 Back to the day in question. On Trafalgar Square the police visibly outnumbered protestors two-to-one. Some 40 officers policed and dished out SOCPA maps and notices of illegal activity. “Suspected” organisers were targeted and threatened with arrest. Organising an illegal protest in London can see the individual face a £5000 fine, or possible a year in prison. 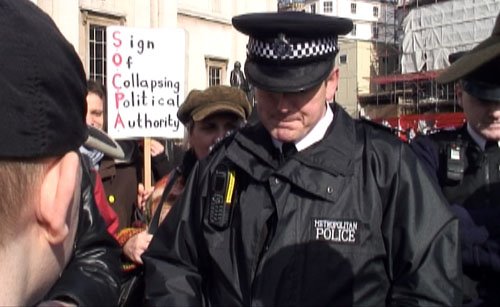 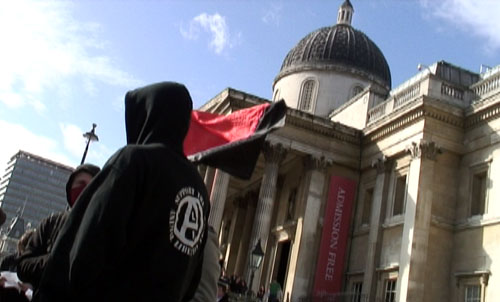 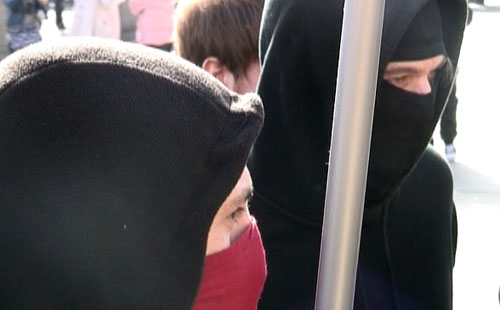 A quick scouring around the zone discovered the police presence was even greater. Outside Downing Street sat two police personel carriers, one being a TSG Riot van. Down the back streets of Whitehall one protestor also discovered a further three riot vans lying in the shadows.

This journalist witnessed several members of the public commenting that their must be something better all these police resources could be used for, like fighting crime. 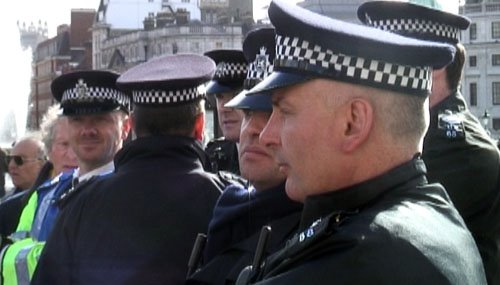 One Forward Intelligence Team (FIT Squad), one photographer complete with two backup and one driver for the FIT SUV, were also present to document all who had gathered at the protest meeting point. 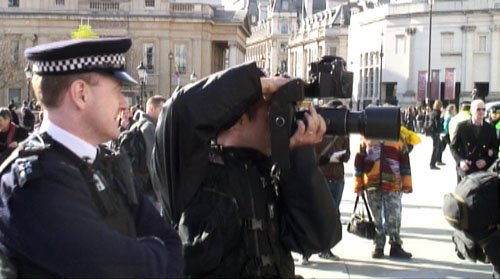 The FIT photographer also catalogued all journalists who attended the protest on a professional basis. 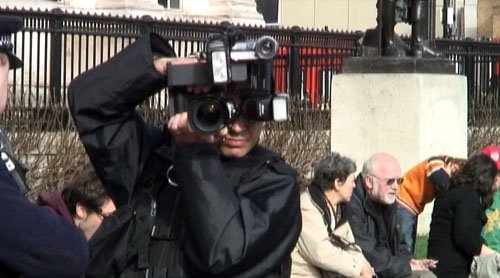 The protest mostly dispersed even before it started, as it was obvious to most the police would not allow it to take place without arrests. Some individuals decided to head to the pub, which took them into the zone. The police followed and performed a Stop-and-Search on one young person, who was earlier seen wearing a black balaclava.

This could be argued by police, and the public, that those concealing faces are intent on public disorder, or worse. But it must also be taken into context that many protestors are concerned about being photographed by police intelligence when it has never been publically stated what happens to all the information and photgraphs gathered. This also goes for the FIT Squads documenting journalists attending protests to cover the events as newsgatherers. 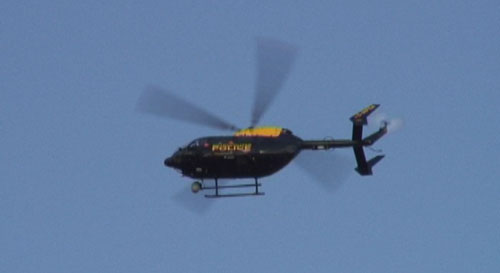 As the now apparent pub-crawl arrived in Parliament Square they attracted the attention of a police helicopter. 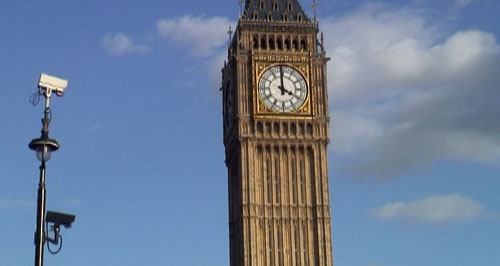 Ironically, I caught this image, almost identical to a shot taken by photojournalist Marc Vallée , as the police helicopoter disappeared behind Big Ben, but only when viewing my footage and Marc’s photograph did I realise the significance of the image.

Now, in 2008, nearly three years since SOCPA was instigated, nearly eight months since unelected Prime Minister Gordon Brown promised to rescind the law, nearly 18 months since police hospitalised photojournalist Marc Vallée on the 9 October “Sack Parliament” protest – now the UK government is due to release the outcome of the Managing Protest Consultation, that civil rights groups fear will impose SOCPA legislation nationwide and further allow police to restrict protest, using the argument that increased laws are needed to protect the public from terrorism.

A recent report from Editorial Photographers UK cited a case where police forced a Birmingham photographer to delete his pictures and listed some of the most serious cases of police intervention against newsgatherers.

On top of that the Metropolitan Police has issued a press release on the 2008 Anti-Terror Camapign, highlighting the possibility of terrorists using photographic and video recording equipment to scout potential targets, and urging the public to be vigilant on these issues and others, such as individuals having more than one mobile phone.

These “suspicious” activities listed by the Met are also the daily activities of every photo and video journalist in the country. So we can only expect to be halted from our lawful activity, be Stopped-and-Searched under the Terrorism Act on a more regulare basis, wasting journalist and police time, and generally be treated as guilty as terror suspects until proven otherwise.

In 2005, as SOCPA was instigated, I wrote a report that plagarised Pastor Martin Niemöller’s famous words: first they came for the peace protestors, but I did nothing because I was not a peace protestor.

Now it would seem a second sentence can be added: then they came for the journalists…

The end of the sentence so far, during public house conversations, has two endings, the obvious being: and I did nothing because I was not a journalist.

But the more popular one so far from a wide ranging circle of photographers, videojournalists and print hacks was: then they came for journalists… “oh shit, that’s us”.