>Saturday 15 March: The Stop The War Coalition (STW) called yet another protest in London, massing in Trafalgar Square then marched on the Houses of Parliament. 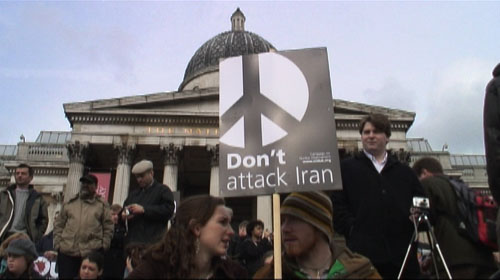 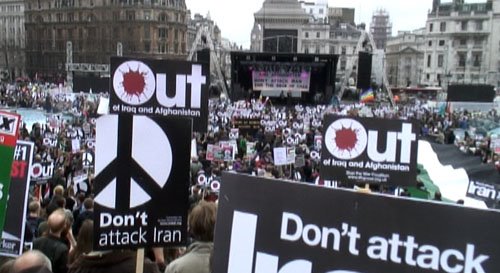 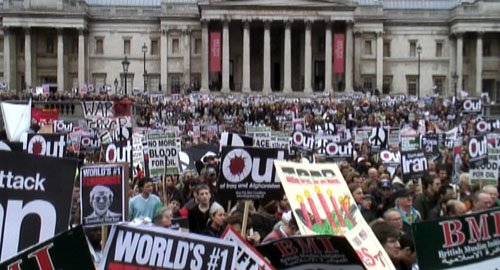 Police estimated the numbers at 10,000, but the organisers said 40,000. The fact of the matter is until it exceeds the numbers of two million or more on that historic day back in February 2003 then it may as well be ten, or two. 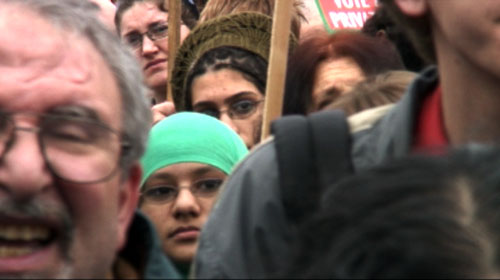 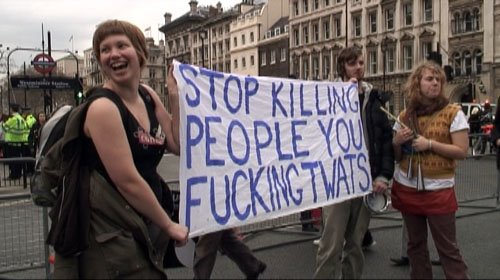 From the day, this was probably the most entertaining banner I witnessed. Again, young and energetic types stole the show from those, now seen by many, as stale and stagnent in the movement that never wanted this war in the first place.

Even Tony Benn has recently come under scrutiny for his statements back at the beginning of the war, for one, “we have to take whatever steps necessary to stop this war. If that means taking direct action like blocking the roads and railways then so be it!” 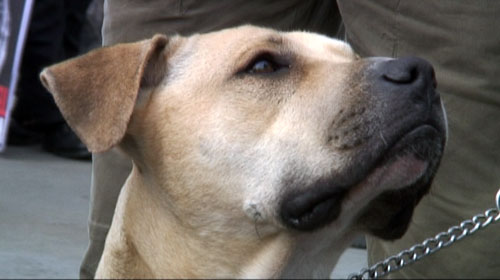 But – despite the same rhetoric coming from the same speakers, that resembled scenes imagined when reading from George Orwell’s 1984, the after-work groups and public gatherings orchestrated by the state to create the idea you are working for a better society and have an active role – at least I got the cute dog shot of the day.

This little pooch seemed to love the day, as it was, for this dog, a day of constant patting and petting. 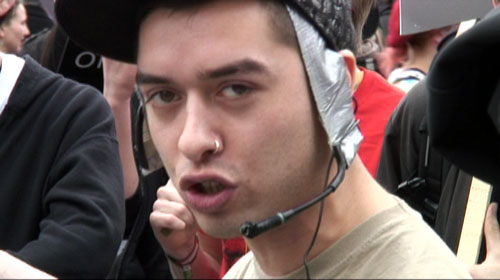 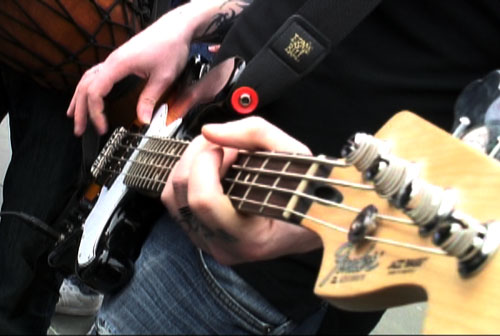 The only other highlight for me was catching these shots of band King Blues, who set up a roaming sound system, thanks to Rob The Rub, attached five musicians to the amplifier and kicked out some solid tunes around the entire protest. 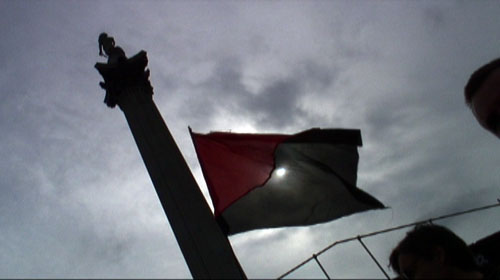 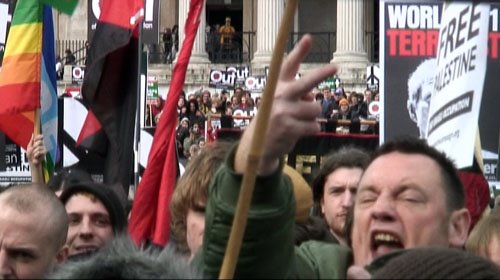 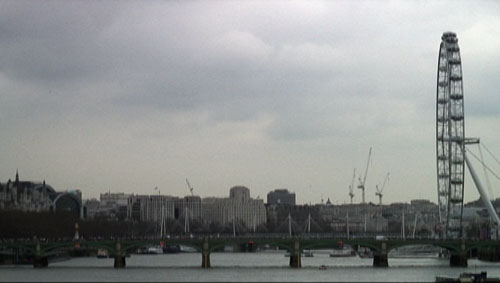 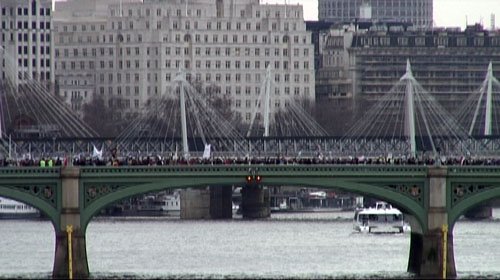 The march headed from Trafalgar Square, down Whitehall, past Downing Street – where the everso elusive Gordon Brown, the most secretive and undetectable of all UK Prime Ministers, is housed – across Westminster bridge – where in days of old those against the state had their heads removed and placed on stakes – on to the south of the river, back over Lambeth Bridge, past the MI5 building and on to Parliament Square for yet more speeches. 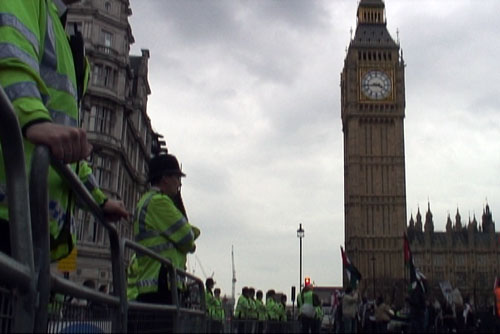 And there we were, back to the Orwell image. 1984. Groups, the public – in anger venting, government condoned gatherings, heavily policed incase of any public disorder. 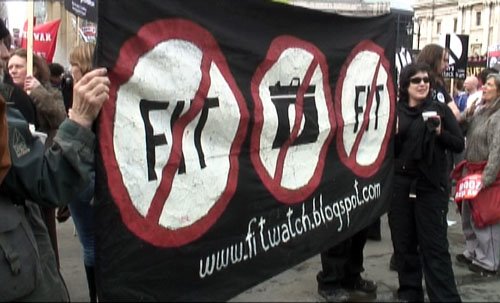 The FIT Watch group were also on the protest, to highlight and disrupt the Metropolitan Police surveillance of peaceful protestors. But as their blog states, “FIT Watch is not an organisation, it is a tactic”. 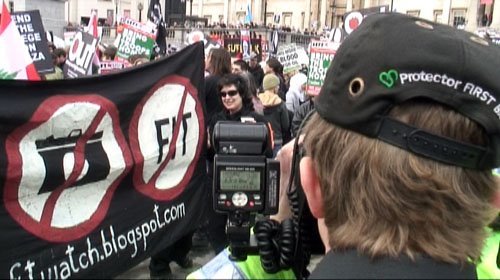 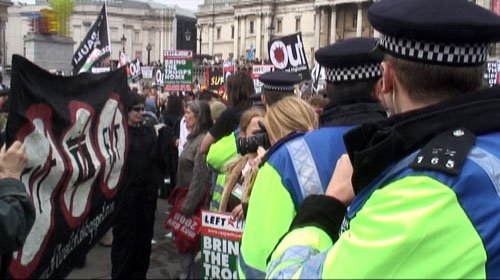 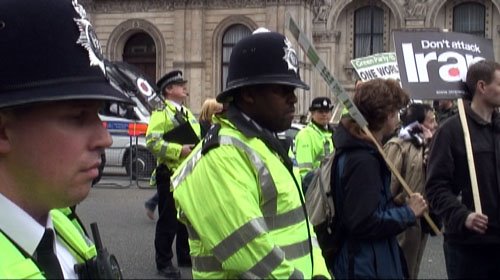 As the protest moved along Whitehall FIT Watch unraveled their banner and police halted the protest. STW protest stewards attacked the FIT Watchers, accusing them of halting the march… 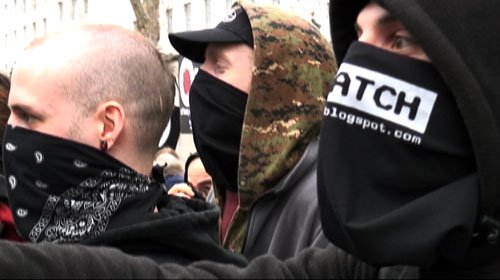 …but as several masked proterstors pointed out, from the pavement, it was the police who had halted the demonstration, and not them. But these words went on to unheard ears of an STW steward, who, unfortunately for them, have the reputation of being rude, powermad, with no concept of solidarity with other protesting factions. 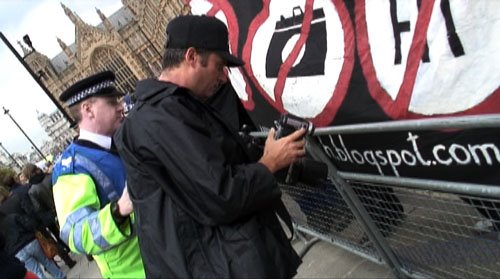 This still from my footage that day shows the FIT Squad filming and photographing the footwear of the FIT Watch protestors. This tactic, as far as I know, was last used against anti-G8 protestors in Genoa, Italy, way back in 2001.

One thing to note here is, from my coverage of the FIT Watch, this tactic of blocking police surveillance photographers with something as simple as a small piece of black cloth, is working. The frustration in the officers is blatant, hence the four arrests for obstructing police operations on that Saturday (correction: the arrests were under s241 TULRCA), although this charge has been called into question in recent months, as the photographers for the Metropolitan Police are not police officers, but civilians working for the police.

The reasoning behind the FIT Teams has also been brought into question in recent months.

What happens to all this “evidence” gathered?

Why are they continually documenting journalists who cover protest, specifically the independent and freelancers – all lawful NUJ and IFJ registered newsgatherers?

How much are these units costing the UK taxpayer and what is the cost per conviction obtained from the evidence gathered during peaceful protest?

These are all, for myself and many other journalists, very interesting questions, questions that so far have not been answered.

In the fight by pro-civil rights protestors against police surveillance, in a country with more CCTV than any other country in the world, in a country with more intense surveillance that can read the time on your wrist watch and hear whispers from a helicopter hovering at 500 foot, this has been, and continues to be, an interesting story to follow. 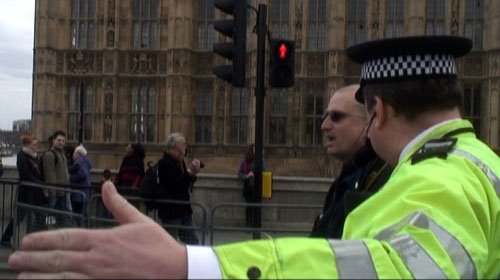 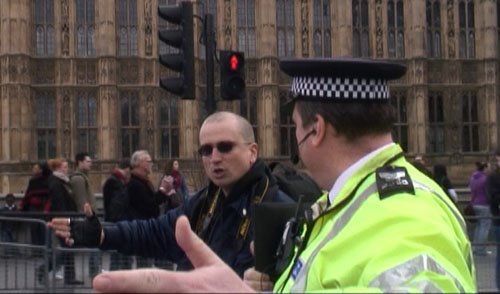 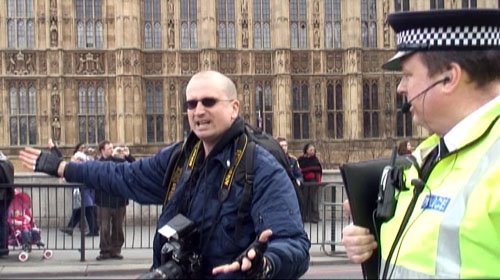 These three final stills from the day show myself and photojournalist Guy Smallman yet again being accosted by a senior member of the police.This time we were asked to move off the road and get behind the barriers. When questioned why, as we were not causing obstruction, hampering the police operation, or obstructing the highway – baring in mind some 30 metres behind us 30,000 people had already done that for us – the final words from this officer was he would get more people to deal with us.

All stills from footage taken on the day.