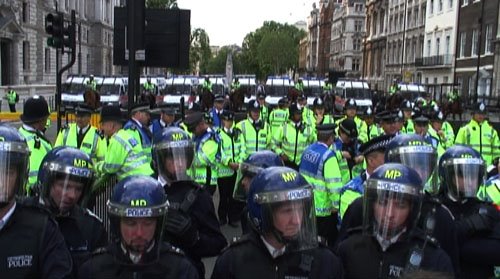 It is now two days past that vicious Sunday afternoon, as George Bush, the most unpopular US President in history, arrived at Downing Street for early evening tea with our own unelected, and most elusive, prime minister, Gordon Brown. 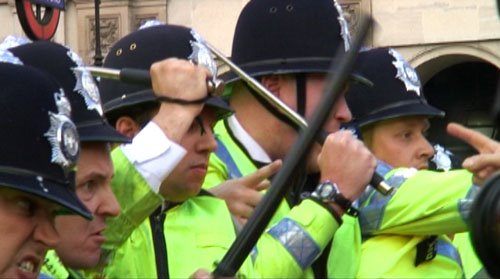 But as the Bush convoy of black SUVs with blacked out windows entered Downing Street Clandestinely, under the protection of 2000 police – hundreds of them armed – with snipers and spotters on Whitehall rooftops, and the street blocked off with anti-suicide bomber barricades, more than 2000 protestors gathered to oppose the president’s visit.

The police refused people the right to protest, but at the last minute authorised a gathering on Parliament Square, making any attempt to march on Downing Street illegal and punishable with a criminal conviction and possible jail time. 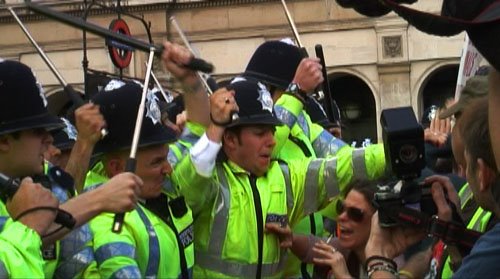 But the people marched anyway. The response by police against those crushed against the barriers was what any Street Journalist would have expected, especially those journalists that had covered the Smash EDO protest in Brighton several weeks back.
Batons rained down indiscriminately on the heads of men and women. Some protestors tried to remove or push forward the first row of security barriers, but that was met with a further barrage of batons. This did not stop the protestors, though. It seemed to myself and others covering that incident that there had been a slight switch in the protest mood lately, and the more the batons came down on arms, shoulders and heads, the more people resisted demanded their right to protest.

One journalist on the frontline reported that he heard a senior police officer yelling: “No arrests. No arrests. Orders from the top.”
As the protest continued to slowly pull apart the front lines of security fencing, from the rear a black mass of riot police, faces hidden under balaclavas appeared from St James Park and blocked in the protestors. Then the snatch-and-grabs started. The fully armoured units stormed into crowds of protestors and arrested individuals. 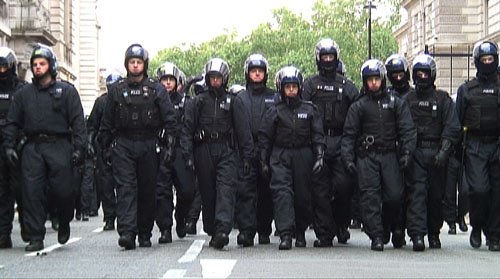 The Metropolitan police said they arrested 25 people that evening and claimed ten police officers were injured. The amount of injured protestors is unknown, but photojournalist Marc Vallée caught this protestor on the frontline, his head bleeding profusely.

Again, most of the UK and International media declined to cover the police clashes on the night. One news agency dropped the story almost immediately, a second refused to cover the violence altogether. That evening, according to all television networks the near two-hour battle for Whitehall did not happen at all. Would it be surprising, then, to learn that media mogul Rupert Murdoch was also in Downing Street having dinner with Bush and Brown.

It seemed that President Bush would have a nice British goodbye after all, no mess, not a smear of blood, just “scuffles“.
By Monday morning things were back to normal, apart from some people nursing their injuries. The UK press began to hit out at the police tactics, what some were calling “blood hungry“.

The Guardian newspaper reported that Scotland Yard would be investigating the anti-war protest further, after they accused protestors of “irresponsible and criminal action”. Again, this is not unlike the aftermath of the Brighton Smash EDO protest, where eight homes were raided the day after the protest, police seizing laptops, mobile phones and even clothing.

The question now is, following two high profile anti-war protests, both ending in what police would call rioting and disorder and what protestors would call brutal state repression, what next for protest in the UK?

With protest bans already in place around the UK, the Managing Protest Consultation never finalised and the 2008 Counter Terrorism Bill slowly winging it’s way through parliament and the House of Lords, and police, both in Sussex and London, seeming to label these recent protests one step below a terrorist attack, one can only wait for the outcome.

But what was in it for Bush and Brown? Brown wanted more US assistance for British troops in Iraq to help reduce the UK presence there. Instead he got a demand for more UK troops to be sent to Afghanistan, which he now intends to do.