Yesterday, Friday 27 June – Veterans Day in the UK – saw Zimbabwe voters go to the polls, mostly, it would seem, at gun point.

Again BBC News 24 reports were typically neutral, declaring it is “expected” that Robert Mugabe would win the election.

This is not hard to work out, considering the mass killings, beatings and rape of opposition supporters to Robert Mugabe, forcing opposition leader Morgan Tsvangirai to back down from the election, leaving only Mugabe in the running race. 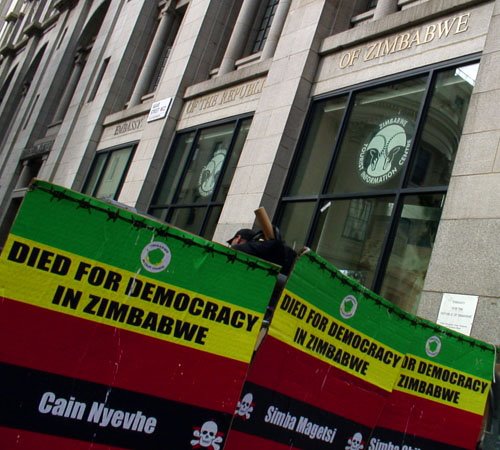 In London the Zimbabwe Embassy on The Strand was strewn with the names of the dead and missing, following a protest earlier in the day, while a single black coffin blocked the embassy doorway. 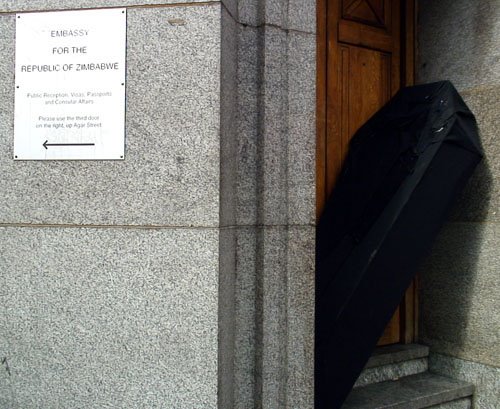 The UK government response to Mugabe, taking into account British and International actions towards vicious dictators and oppressive regimes in Afghanistan and Iraq – if anyone believes those constantly reverberated government justifications for those wars – for Mugabe the gloves were off and gauntlet thrown down. 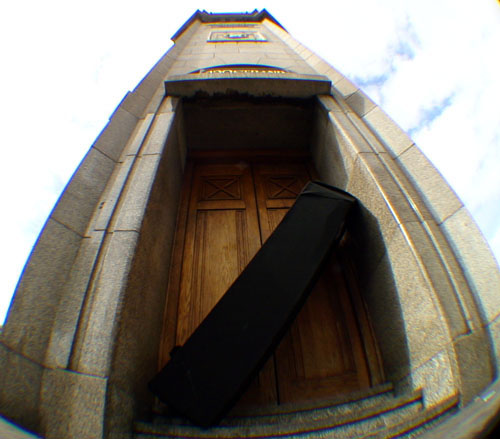 That’s right. The UK government took away his cricket, Mugabe’s Zimbabwe team banned from playing England next year. And the Queen, our poverty-stricken and credit-crunched Queen, stripped Mugabe, who was educated in the UK, of his title.

According to UK newspapers 80 people are are dead in Zimbabwe due to the murderous sham that is still being labelled an election in the UK and 10,000 are are injured. But due to most, if not all, international press banned from Zimbabwe the figures are sure to be much greater.

UK prime minister Gordon Brown called the “elections” “criminal”, but Brown was getting more press that day because Labour came fifth in the Henley by-election, the fascist Brtish National Party (BNP) coming forth with 1,243 votes.