Following the early morning police raid on the Camp For Climate Action near Strood in Kent, life had almost returned to normal by lunchtime on Monday 4 August.

But several hours later riot police tried a second time to enter the camp simultaneously through all three gates because of “health and safety” concerns.

Since then all has been relatively calm on the camp and protestors have been entering on a steady flow, increasing the numbers to well over 1000 people by Wednesday morning, if the number of newly pitched tents were anything to go by. 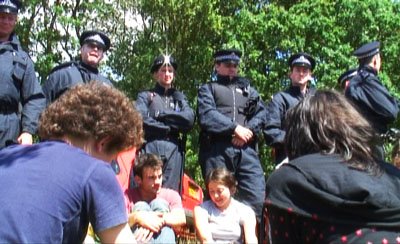 While this report was being typed up, the latest updates from the camp this Wednesday late lunchtime said there have been a few more push-n-shove incidents between police and campers and the authorities have formed a roadblock to halt the shuttle buses from gaining access to the camp. It was reported that police had arrested the drivers.

Below is a short interview with camper David who witnessed the first police incursion onto the camp on Monday morning.