Wednesday 6 August 2008: The Camp For Climate Action was back to how it was meant to be, working towards the days of protest, networking and workshops were on the go. Not that I saw much of that. Never been good at meetings. Ask anyone. 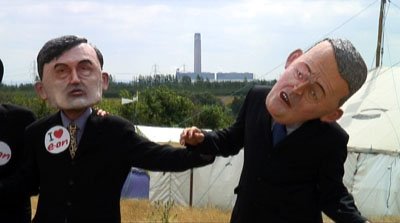 Around 3am Wednesday morning the police began the grind down tactics once more, riot cops deploying for several minutes, backed up with low flying helicopters – who also seem to enjoy disrupting filmed interviews – then they retreat when enough people are awake on camp.

For anyone who’s been covering these events long enough, know there is never any possibility of a raid, it is simply designed to grind down the protestors before the big day. Sleep deprivation sets in, as 3am raids mean most will not hit that important REM where the brain properly recharges. 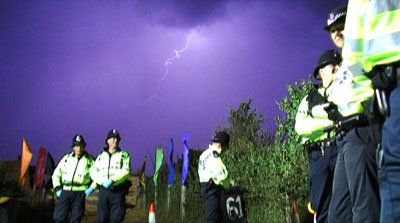 But, as many protestors I talked to on Wednesday said, enough of the police. The tactics are generally not working. People are wise to this and refuse to rise to the bait. Instead tents were full of chatter, kitchens brewed up food, groups of people discussed, debated and giggled the hot day away.

I spent the “media hours” interviewing London-based anarchist Sandy Hale, to head away from the usual Climate Camp interview and try to gain a slightly different perspective (see video below).

By Wednesday night the air was stifling and, to quote William Burroughs, “reeked of ozone”, as one of the biggest electrical storms I have seen for some years hit the Hoo Peninsular. It wasn’t the only thing that hit, though. Apparently the entire peninsular is now under a Section 60 order. So, stop and search with no grounds of suspicion is in force.