Friday 8 August 2008: I should have been blogging more on the camp today, combining more camp-life shots with an interview with the Wembley Park Tent City Occupation Teachers, who visited Climate Camp this week, but unfortunately myself and other journalists have been pulled back, yet again to the policing story following an incident at the main gate earlier this afternoon. 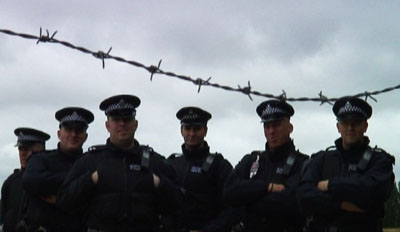 Three protestors exited the camp around 2pm, began taking photographs of the various units of police intelligence gathering teams, some from the London Forward Intelligence Team (FIT Squad), then they refused to be stopped and searched.