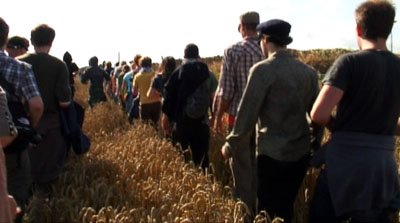 Saturday 9 August 2008: The Camp For Climate Action opened up early for business. The visible policing was down as our group travelled in that morning. The stop and searches too. We met City of London Police in Hoo, who did a very quick search of our bags. No pat-down. Hardly any delays. In five minutes the three of us were through and on our way to the main gate. We didn’t even bother with the pink slip. Not unlike previous days – being held for 40-minutes, having our car searched and one of the group being assaulted twice in a matter of minutes by the West Yorkshire police, then being told: “See you Saturday.” 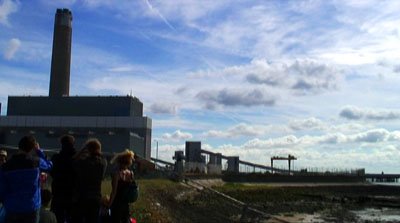 Calls and texts the previous evening said the protestors would head out early and fear of a night time raid was high, as is common in these situations, but the dark time went on unhindered and the camp slept sound, ready for the next day of action against the E-On Kingsnorth coal-fuelled power station. 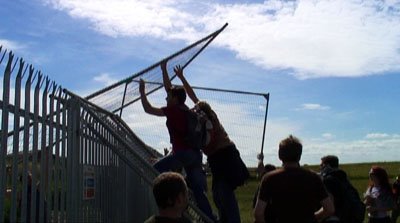 I followed the green block out, a group of about 100 people intent on making it to the security fences of the power station, at all costs. Policing at the rear of the camp was low. Bar a few altercations – several people getting floored by batons on a grass verge while trying to cross a main road – all went well.

The group was split, but within an hour everyone was together again and then the aim was to breach the intense security of spiked fences, electric fences, CCTV and riot police to gain entry into the power station. 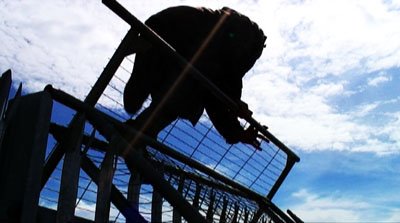 Makeshift fences were torn down and used as walkways over the first fence, then thrown up against the electric fences, which were erected several weeks earlier, only to find the electricity designed to fry intruders was not switched on. The few protestors that made it over were immediately arrested. According to the media camp on-site some 70 people were arrested that day. 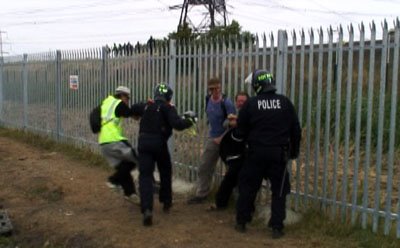 The policing had been minimal till this point on the green block, bar the skirmish on the grass verge. But by the time some 20 people were over the first fences the surveillance squads called in backup. Riot police moved in, dismantled the fence walkways and stared knocking people around. The security cordon increased in minutes and everyone was ejected from the surrounding area. 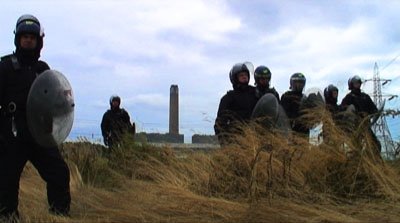 By the time I made it over to the main gate, riot police on horses forced the main group of protestors back to the camp. A small group remained in a sit-down protest, but were removed by 2pm by riot police into waiting prison vans. 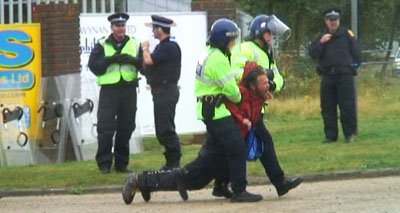 The question is, did all these actions work?

The invasions managed to drop banners highlighting the issue. All mainstream media had taken on this issue, heavily critising the policing and the National Union of Journalists (NUJ) had condemned the treatment of journalists trying to cover the story. Although it has to be said the policing on this day was relatively fair, bar a few beatings and kickings. Not to justify this kind of violence against protestors, which is always a sign for all that civil rights in this country is slipping, but as many a journalist will tell you, we’ve seen a hell of a lot worse, and not so many months ago.

According to E-On, Kingsnorth was shut down before all this started. Apparently it was due for necessary maintenance work the same week the protestors were expected. But the boilers that fuelled the plant kept going. If they were shut down it would take at least five days to get the site operational again.

One thing the protest did achieve, as many small and large protests do, it got the message out to the mass public. It is time to seriously look at where we get our energy from. And that does not mean studying your plug socket or gas cooker. Everything we take for granted has a knock-on effect to the environment, to the world. And to be informed this week, by protestors, by politicians, by journalists and scientists, we are the last generation to alter this downward spiral of global warming is a harsh statement to digest.

It is ironic, but I watched the Charlton Heston movie Soylent Green before I came to Climate Camp, a movie I had seen as a young man growing up in Thatcher’s world and only now did I see the resemblance of today’s world to that 1970s science fiction movie. An over-heating and over-populated planet, where food, water and fuel had run out.

But as one riot police officer put it to me today as the final protestors were arrested: “There must be something wrong. Just look at the weather.”