Friday 8 August 2008: The day before the day of direct action the policing levels racked up a notch, to which some highly experienced photographers and journalists, who had worked through many conflict zones, could only describe as a “police state”.

Section 60 of the Criminal Justice and Public Order Act was in force across the entire Hoo peninsular in Kent. Everyone was being stopped and searched, and everything and anything was being confiscated – pens, children’s crayons, bike nuts, bike spanners, inner tubes and gaffer tape.

And it was no different for the journalists and photographers there. We were all now under the same suspicion as protestors for carrying offensive weapons and items that “could” be used for criminal damage. 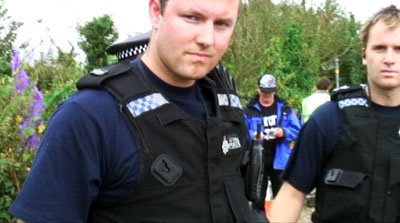 As our group exited the camp after media hours were over, a London Forward Intelligence Officer had a “friendly chat” with one colleague. It was then the Inspector from West Yorkshire slammed into him, grabbed his arm and began frog-marching the photographer down the road. The above still was what I discovered behind my back as I began filming the incident. Another officer had stepped in behind and looked like he too was going to go for me. The Sergeant pulled him away quickly. But, boy, if looks could kill…(see the video below). 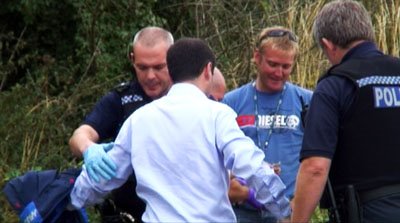 Only minutes later as three violent arrests occurred outside the camp main gate, again the same photographer from our group was assaulted, repeatedly pushed back against the gate barricade. One officer laughed at him, thinking it was funny that his hands were shaking. A second officer leaned into the photographer and said: “See you tomorrow,” which, in the circumstances, could only be taken as some kind of threat. 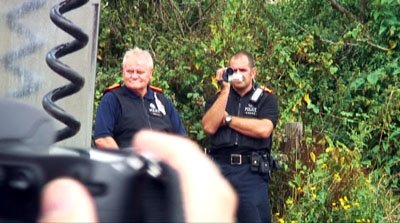 All the time I noticed the police video surveillance cameras were on every photo and video journalist as the arrests took place. We were back to the previous issue of journalists being put under surveillance.

The London Forward Intelligence Team (FIT Squad) last month stated journalists were only photographed or filmed as “collateral damage”, being caught in shot when protestors were around. But this still above shows clearly the police camera pointing at a group of journalists. The only protestors around were the three on the floor, ten feet away, screaming, with police officer’s knees in their backs and necks, pressure points being squeezed. 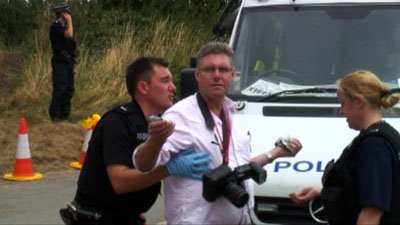 As we walked back to our car we thought that was it for the day. How wrong we were. To get the car we were ordered to have a police escort. When at the car the officer said he would need to search us and the car. The video below documents the incident, despite being told to turn our cameras off.

Following the video we were held up for another hour as the fourth person of our group was held in a huge queue, waiting to be searched, her second that week.

The final incident that day was, as our group filed pictures and video from a nearby McDonald’s hell hole, using its free wireless connection, a group of ten officers arrived and began filming us inside the restaurant. I had had enough by this time, went outside for a cigarette, knowing full-well at least one officer we not be able to help themselves.

I was right. A senior-looking officer came over, commenting it was strange our group was in a MacDonalds, as “these places are usually targeted”.

“What, by journalists?” I replied.

I then asked if he and his officers were going in for food.

“No, we’ve already eaten,” he answered, patting his stomach. So, not there for food. Why were they there then?

Some may consider calling this behaviour a police state severe. But police state does not entail only brute force.

One of the most important elements to a free and democratic society is freedom of the press. And it is police tactics like this that is eroding that away, slowly at first, but the last few steps come very fast indeed.

If the press is not free to document the situation, the situation could turn into something horrific and no one would know. It is that simple.

Friday 8 August 2008 was one of the weirdest days of my life in all the years I have been covering these events. That night at press camp, with six experienced professionals there, the theories on the police tactics fell into one slot – to cause harassment, to waste our time, to threaten and intimidate, and to make us go away.

And no matter what some – a very small minority – of the Climate Campers I met thought of paid journalists, I’m sure they would not want to see us disappear from covering this kind of stuff. If we did, “free-for-all” is a statement that comes to mind.