Saturday 16 August: The rolling hillsides of Codnor in Derbyshire were the scenic views to take in as the British National Party (BNP) gathered for the 2008 Red, White and Blue Festival. 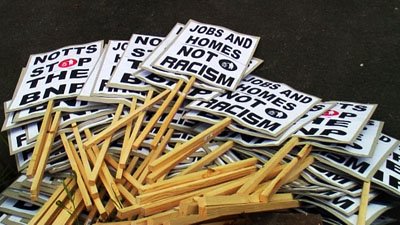 Anti-fascist groups from Nottingham, Derby and London gathered in Codnor village and marched on the festival chanting “Smash the BNP”. But there wasn’t much smashing. The protest was completely kettled by police, who later donned riot gear as a BNP supporter barged through the demonstration.

One journalist pointed out that if that had happened in the days of the Anti Nazi League (ANL) the only way a BNP member would have got out of the protest was on a stretcher. 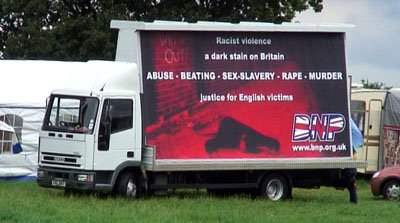 Meanwhile, in the neighbouring village Heanor, the “hardcore” protestors the police feared the most arrived. ANTIFA got surrounded by riot police and hurled rocks in response. News reports said some 33 to 40 people were arrested. 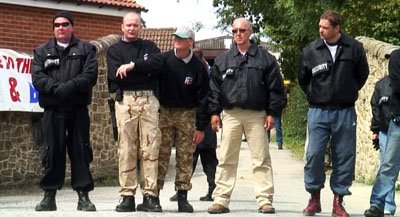 Gone are the days of bonehead bootboys, Nazi flags, Hitler salutes and “OI” music – or so says the BNP. Now – claims their leader, Nick Griffin – the BNP is a “legitimate” political party.

Greater London Authority BNP councillor for Dagenham, Richard Barnbrook, has gone as far as threatening to sue anyone who calls him a fascist. Of course, he has never actually tried, only threatened. As Barnbrook claimed back in May this year, there is a new dog in the GLA and it isn’t a “poodle” (see bottom video). 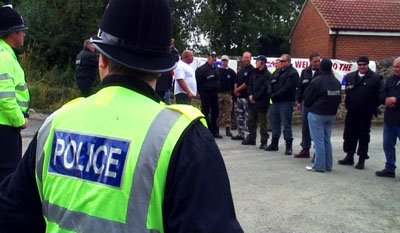