Saturday 6 September: Ledbury in Herefordshire is home to the Sequani Medical Research Laboratory and the centre of a civil rights case involving a recently jailed activist. At 12pm animal rights and civil rights protestors gathered for the Carnival Against Vivisection. 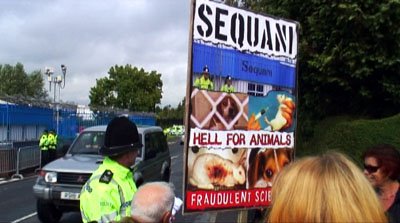 Fearing the worst, West Mercia police, with a little assistance from the London Forward Intelligence Team (FIT Squad), imposed Section 14 of the 1986 Public Order Act, restricting the protest to a grass verge opposite Ledbury train station between the hours of 12pm to 5pm, allowing only 15 people to demonstrate outside the laboratory at one time and denying any further protest after 5pm. The march of 150 protestors through Ledbury was allowed, but only with heavy police presence, including police dogs and helicopter. 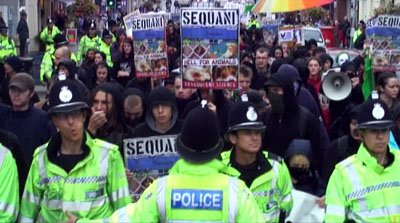 Initially the protest tried to march on Sequani, but was halted by a wall of officers and several people were arrested. 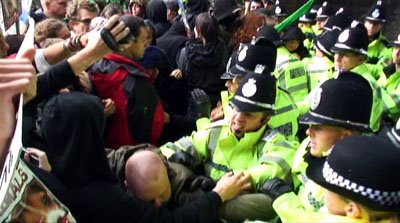 The case of Sean Kirtley brings further to light the question of how far civil liberties in the UK have slipped. Kirtley, a dedicated animal rights activist was imprisoned for over four years under the controversial SOCPA legislation after an 18-week trial found him guilty of conspiring to interfere with the animal research laboratory.

According to Kirtley and his supporters, he did nothing more than write letters to Sequani, run a campaign website and organise peaceful protests.

The Independent newspaper reported the judge who convicted him was a fan of blood sports. 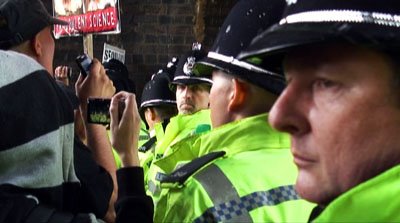 Upon his release from prison Kirtley stands to face a five-year anti-social behaviour order, which could halt any further involvement in political activity and impose curfews and restrictions of movement.