At around 1pm this afternoon Shell released a statement to announce the pipe-laying ship Solitaire would return to the UK for repairs. 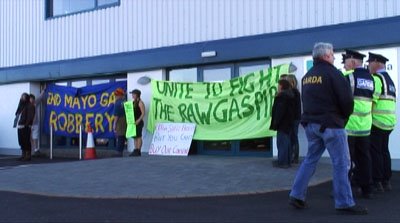 The statement came as ex-head teacher and Shell To Sea campaigner Maura Harrington entered her tenth day of hunger strike. 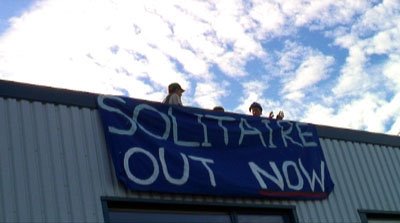 The previous day protestors occupied the rooftop of the Corrib Gas Project offices in Belmullet. Two of the three rooftop occupiers were not arrested, but merely detained at Belmullet police station a while, as names and addresses were confirmed. This policing yet again confirms the policy of no arrest in the area, that has continued for nearly two years, following superintendent Gannon’s “no martyr” statement in November 2006. 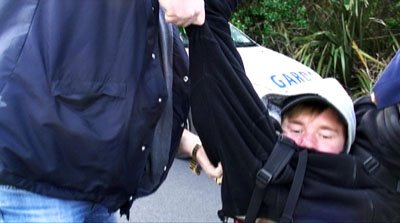 Around Glengad in County Mayo, the site of the pipeline landfall and Maura Harrington’s hunger strike, the response was mixed. Campaigners and residents were at first overjoyed, but added they would believe it when they saw it leave Irish waters, as Shell had continually lied to them over the six-year campaign.

One local remined others today that only yesterday the campaigners were being blamed for a bomb being left on the doorstep of Shell headquarters in Dublin.

Maura Harrington said she would only believe the Shell statement when she got a UK postcard from the ship.

All material on this blog – stills, video and print is (c) Jason N. Parkinson 2008. All Rights Reserved.