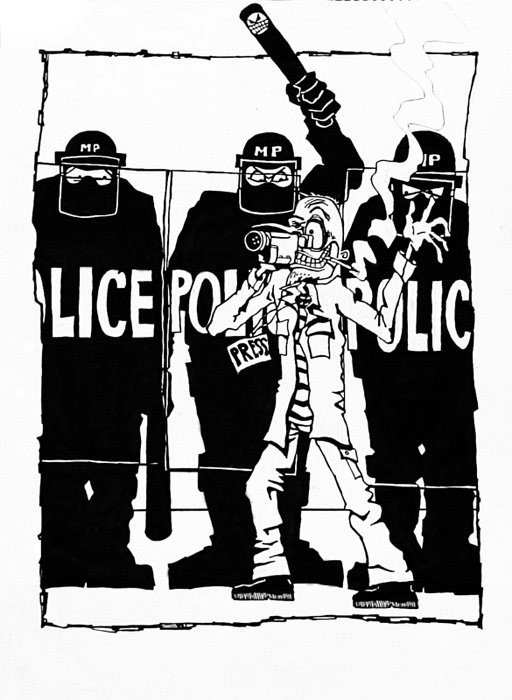 Everything and everyone received a dissenting welcome, Scientology, the Olympic Torch, George W. Bush, Shell and BP, and fascists entering the Greater London Authority – democratically elected, I might add.

War started the year and war ended the year. And it looks like war will continue through the next year – I guess when it comes to the nation’s GDP income; if it ain’t broke don’t fix it, right?

And all the while my very own little pet Credit Crunch sits in the corner of my soon to be vacated flat, waiting to be petted and patted and fed billions in UK taxpayer’s money. But with the continuing food crisis I’m not sure I can maintain feeding it. Perhaps a public private partnership investment, like the Academy school system, can save it. You know, publically promote private ownership but keep the public paying for it while the private sector shave off and pocket the profit.

The international banking system collapsed on October 10 in a blaze of three dimensional graphics, fresh from the bowels of the BBC design department, then crashed further down the FTSE Index in November, but no one cared by then. John Sergeant had been brutally treated at the hands of insane Strictly Come Dancing judges.

When I returned from Mexico in August 2007 – this time with no threats towards my manhood from paramilitaries, just a one-way unpaid ticket out of Oaxaca State – there was an immediate and obvious downturn in the political climate, which begged the question, what the hell happened while I was away? But more importantly what was to come?

The answer came as early as January 2008 when the first Freedom of Assembly protest marched without SOCPA authorisation. The human right oxymoron “illegal protest” was one step below international terrorism, unless you were a bunch of Conservative party members, that is, in world-saving Gordon Brown masks and waving VAT placards, the later being a “media event” according to the authorities.

Policing came hard, heavy and in huge numbers at a non-reduction rate to the taxpayer. Protests against weapon component factories, animal research laboratories and the Greek embassy were met with the same notorious TSG police units, and the outcome was always the same.

Terrorists were everywhere, in protests, animal rights movements, environmental movements, even outside New Scotland Yard being interviewed by international media organisations about the use of the terrorism act.

It would seem that Jello Biafra‘s comments way back in 1997, like elements of Orwell’s novel 1984, have now come true. If you want to dress up as a giant turtle and mess with the corporate agenda then you must be a terrorist too. Unauthorised costumes in public also include Polar Bears and 19th Century Suffragette bonnets.

After all, capitalism works, contrary to those leftist banners and coffins declaring it was dead. Capitalism is not dead, it just got a £500 billion blood transfusion.

All that can be said is thank the lord the 2008 Counter Terrorism Bill finally passed parliament and the country is safe from those pesky photographers. That’ll teach the evil doers.