30 October 2006: Following the murder of American journalist William Bradley Roland (Brad Will) protestors gatherered outside the Mexcian embassy in London to inform them “The World Is Watching” and to project the last 16 minutes of film Brad Will ever shot directly on to the doorway of the embassy. 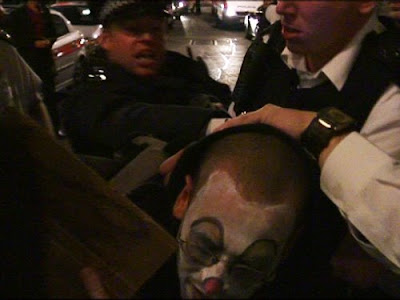 Brad Will was shot twice through the chest while he documented the 2006 civil uprising against Oaxaca state governor Ulises Ruiz Ortiz. Even after his death his camera continued to be passed from hand to hand.

This did not go down well with the occupants inside the embassy and soon the entire area was swarming with around 70 police officers, including officers from the now infamous Territorial Support Group (TSG).

Now, three years later the footage of my filming that night appeared in The Times article reporting the unlawful arrests of five protestors that night.

Channel 4 also used the footage in the Simon Israel report of the protestors 40-hour unlawful detention, that left the UK taxpayer forking out £85,000 in compensation.