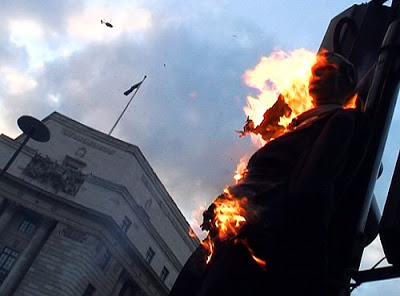 Saturday 20 June 2009: Global Economic Meltdown, the film documented my experiences covering the G20 protests in London, has been shortlisted for the 2009 Fast Forward Film Festival.

The competition is hosted by A World To Win, which campaigns for an “end to corporate power and a new democratic political system”, asked for film submissions on the subject of “the crazy world of capitalism”.

After working on the G20 protests for Associated Press I felt compelled to put an accurate embedded account to tell the story of what I witnessed during those first two days in April, which completely contradicted most of the media reports at the time. Those original reports have now been questioned, as evidence, my own included, slowly emerged to contradict the official police line.

The film is now posted on the Fast Forward web site, allowing you to view, rate and comment on the film.