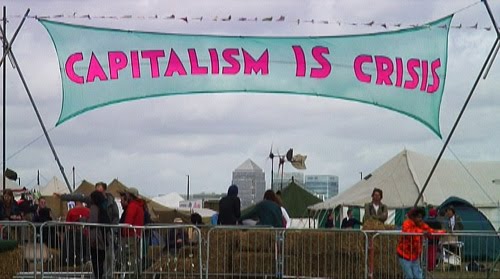 Wednesday 26 August 2009 saw the 2009 Climate Camp “Swoop” on to Blackheath in South London. The camp was set up for a week of discussions and workshops to tackle climate change and a series of protests took to the streets of the capital, targeting banks, public relations firms and energy companies. 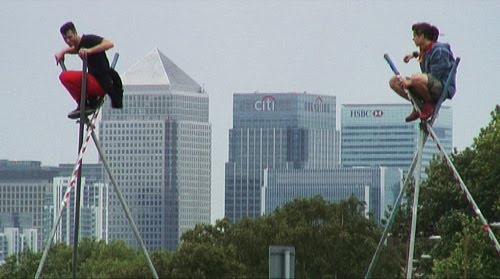 Protest targets included Barclays Bank headquarters – who provided nearly £6bn in loans to fund coal-related industries – London City Airport – which is due to massively increase the number of daily flights – Royal Bank of Scotland – one of the largest investors into new carbon initiatives – Edelman Pr – the “greenwash” merchants for energy giant E-On – and British Petroleum (BP). 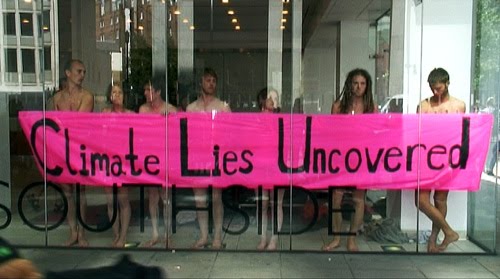 One noticeable change was the low level policing of the protests and camp, as opposed to the previous year at Kingsnorth in Kent, which led to the Guardian investigation on how protestors and journalists were under surveillance.

But it seemed with the police out of sight, underlying frustrations from certain individuals manifested themselves into hatred of the media. Not just the mainstream media, but anyone with a press card and a camera. 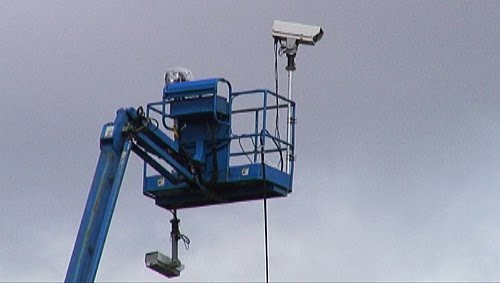 And with little to no regard for the police surveillance camera watching everyone on the camp, nor any concern as to why the police felt they could stay away and not have to worry about large scale disorder, in less than a week two photojournalists were assaulted, outside the camp and away from the Climate Camp media policy. Because these two journalists had complained about the Climate Camp media policy being a breach of press freedom, some of the arguments that came back seemed keen to point this out, starting the comments usually with, I am not condoning violence, but… 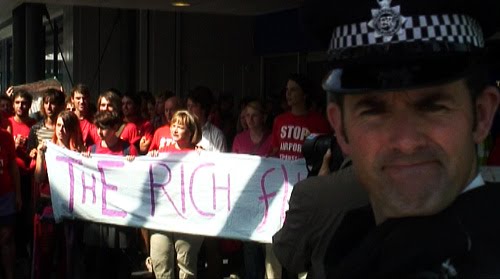 The answer to the police response of course is that surveillance was the openly admitted favoured tool for the state this year. Take also into account the Forward Intelligence Teams have probably got more data than they can manage on the environmental movement and must know everyone by face, even when they are masked up.

Plus, the obvious fact, as one Climate Camper pointed out, if the police don’t steam into arrest protestors, violence is minimal, if not non-existant, thus many media outlets will ignore the story. A clever move on the part of the state, making the protests a non-story. 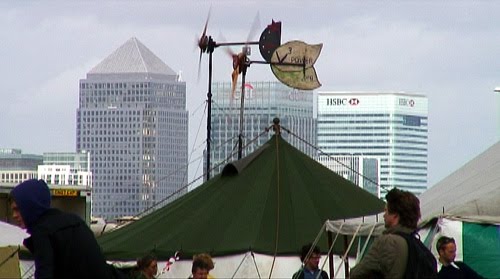 But it wasn’t just the press who complained about this year’s Climate Camp. The Whitechapel Anarchist Group (WAG) also put “pen to paper” to show its distain.

I myself embarked on a social stereotype study, appearing one day at the camp in my usual work clothing, shirt, jeans, green waistcoat with enough pockets to hold all my accessories at hand and was stopped every few minutes by campers rolling out the media guidelines, despite having a minder and knowing a good third of the camp from the work I have done over the years. After several incidents like this you can imagine it gets a bit boring.

The next day I arrived, same clothing, but I left my ear and nose ring in – my other piercings don’t come out so easily – I wondered around on my own for ten minutes, camera out, then was challenged by a camper.

“Are you a journalist?” he asked.

“How many journalists do you know with a nose ring?” I pointed out.

“Oh, right. Of course. Sorry,” and he left me be after adding I must be telling the truth because I had holes in my jeans.

It was on this day I also learned a Climate Camp photographer, and a member of the National Union of Journalists, had told my colleagues “Climate Camp is more important than press freedom”. Something I’m sure Hitler, Stalin, Pol Pot and Mugabe would keenly agree with.

Then I learned this photographer spends most of their time away from the camp doing advertising jobs, for the likes of certain car companies, and Nestlé, whose track record includes the deaths of thousands of African babies – they didn’t inform all those mothers that powdered milk needs a clean water supply – and more recently the alleged assassinations of unionised workers.

Climate Camp itself came across as a success. The protests hit their targets, caused some disruption to the business running and the issues were pushed that bit further, with an estimated 5000 people attending the camp over the week . The most impressive part was the “swoop” day, seeing everything come together and all the logistics of the camp arriving, one truck after another.