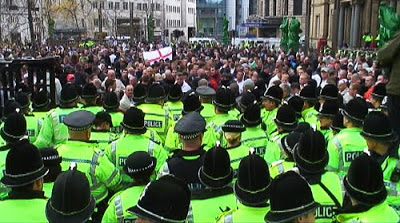 Monday 02 November 2009: Upon returning from covering the English Defence League (EDL) protest in Leeds late Saturday night, I find a personal message in my inbox from a prominent English and Welsh division organiser. The email was entitled “Fatwa”. 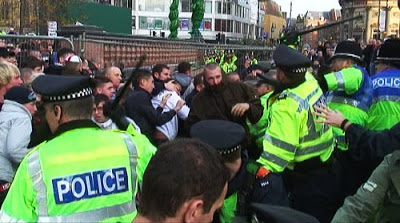 The email said: “A fatwa has been issued on you my communist friend. Enjoy any money you’ve made from EDL protests as if you are spotted again you will be fed up.”

It was signed “Simples”. Unfortunately the sender didn’t think to email it from a fake account, so it is known this person – a Cardiff supporter with three convictions of violence, including two years jail for stabbing two Manchester United fans – was prominent in the creation of the English and Welsh Defence Leagues.” 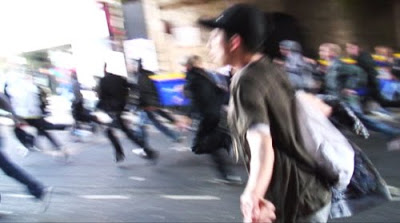 EDL protestors rampage through the streets of Leeds

The National Union of Journalists (NUJ) moved fast this morning to publish a press release statement exposing the extremist tactics of the EDL, denouncing the intimidation and violence against the press, and has called on the police to take “tough and urgent action”.