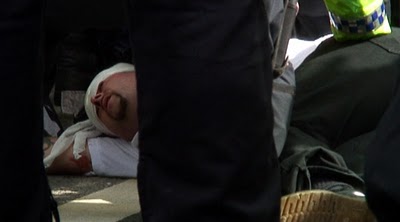 Saturday 28 August 2010: The English Defence League (EDL) brought their far right supporters and the racism and violence that comes with them to Bradford for what EDL organisers had dubbed the “Big One”.

EDL numbers were less than a 1000, for the first time in a year the police outnumbered them three-to-one and the usual attempts to break through police lines to rampage ended in a wall of riot cops and batons.
Fourteen people were arrested, several police officers and protestors suffered injuries. One EDL supporter (pictured) suffered a serious head injury after being struck with a rock from another EDL member.(c) Jason N. Parkinson 2010. All Rights Reserved.