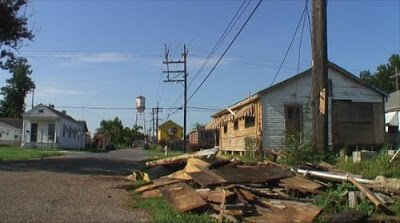 Last year’s trip across four US states alon the Gulf coast caught some interesting scenes away from chasing tar balls and corexit foam.

While in New Orleans I went to look at the Ninth Ward, the poorest district in the city and also the district with the highest death toll during hurricane Katrina. Five years on only third of the population returned, nature had taken over and many buildings, even entire streets, lay exactly where they did when the storm passed.

On the outskirts of east New Orleans, slap bang in the middle of a heavily populated suburb, lies the BOC Gas Refinery.

With a population of 1.5 million in Louisiana you would think you’d be seeing alligators everywhere. Not so. Not unless you take one of a thousand tourist trips inot the swamps. Luckily on the last evening, heading back into New Orleans from Point a la Hache, these alligators were spotted on the edge of a nature reserve. The protective fencing had been pulled down by poachers, allowing access to the rivers edge and a closer look at these amazing creatures, some spanning more than three metres.

With August being the start of hurricane season and the fear that strong storms would drag up oil, dispersant and dead or dying sealife from the floor, the Gulf coast run entailed chasing a lot of storms and tropical depressions, hoping they didn’t turn into full scale hurricanes.

Grand Isle, the most southern point of Louisiana, and the most devestated area from the BP oil disaster, is also known for its stunning sunsets.