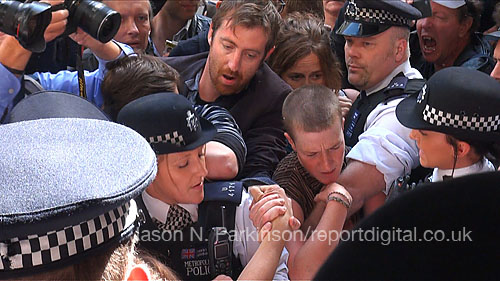 Friday 31 August: As the Paralympics played out in East london, protestors from Disabled People Against Cuts (DPAC) and UK Uncut held a demonstration outside ATOS headquarters, the private company with a £3 billion government contract to cut welfare claims. As protestors gathered at ATOS headquarters near Euston, protestors invaded the foyer of the Department of Work and Pensions (DWP) in Central London. Clashes broke out as police tried to set up a cordon across the DWP entrance.

More footage is available from reportdigital.co.uk