It is now just over two weeks since the protests against the London 2009 G20 summit and a lot more has become clear since video and photographic evidence has rolled into various news outlets and online self-publishing websites. 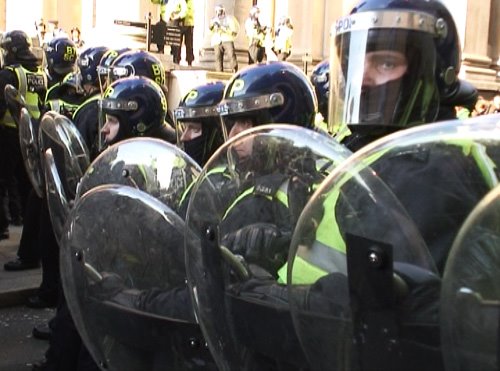 My work on the G20 started with a short film on The Government of the Dead back in February. University of East London anthropologist Chris Knight took his band of zombies, dancing their way along Oxford Street to Tyburn, the site of ancient public executions, now known as Marble Arch, to hang an effigy of a banker. This followed on from the previous film Global Economic Crisis: The First Wave, which documented the initial London protests against failing capitalism and the £500 billion banker bailout. 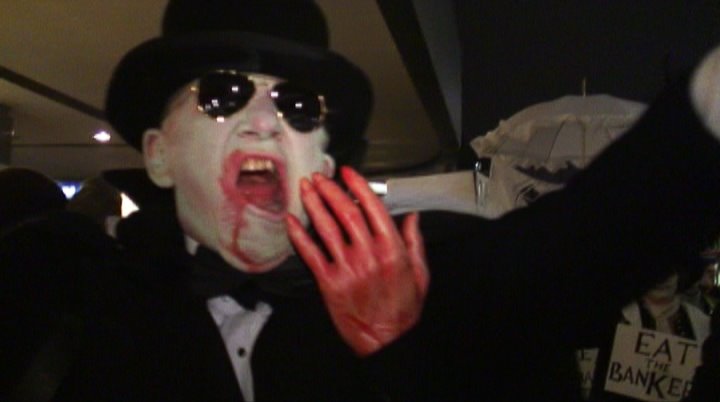 Film: Government of the Dead: Hang a Banker

As Knight was splashed across the news as an instigator of violence, he was suspended from work and the Counter Summit he organised was cancelled at the university, the zombie carnival footage became part of the Guardian report on Knight. 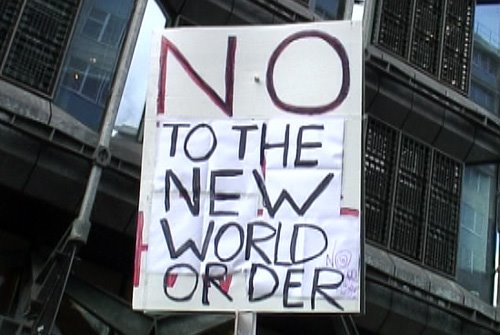 On April 1st, as thousands gathered around Liverpool Street station, the Space Hijackers drove a “riot tank” to RBS headquarters in the financial district (and immediately had it confiscated) and Climate Camp settled in their tents on Bishopsgate, I followed one arm of the four-pronged march on the Bank of England, straight into the lines of some 10,500 on duty police officers, all called in to protect the 29 leaders of the G20 group, and protect the banks and the bankers, well, apart from the Threadneedle Street branch of RBS, which was the only building in the area not boarded up. 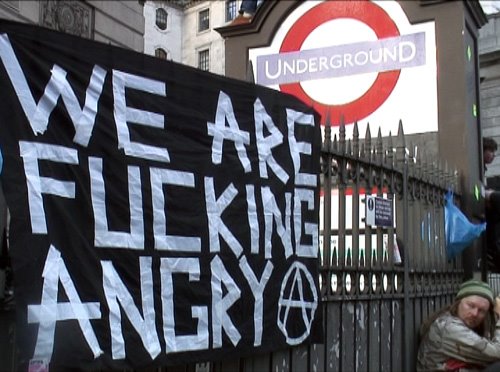 The rest of the day panned out as most protest journalists imagined, hence many experienced photographers and video people using the now mandatory improvised safety equipment – helmets and arm and leg padding – something in itself that says a lot about policing these days. Others were not so ready for the brutal onslaught brought down into the streets by the infamous Metropolitan police force and the notorious black-clad, storm-trooper unit, the Territorial Support Group (TSG). 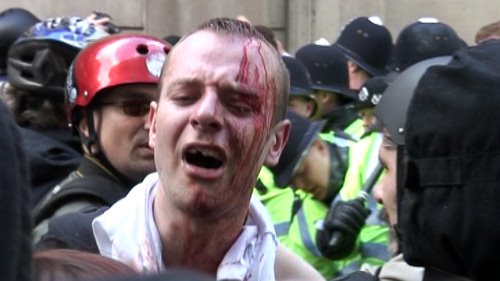 One particular baton charge at a group of press at 5.29pm left one photographer beaten and trampled by riot police. 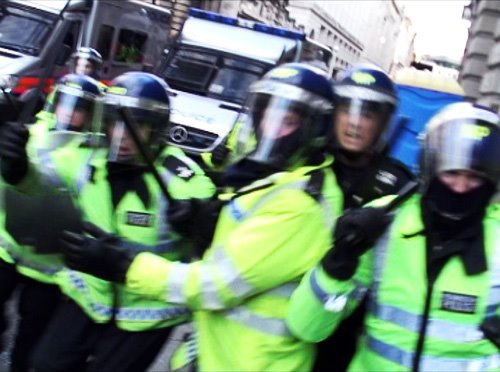 Another photographer earlier that day had his arm broken after riot police beat him with telescopic truncheons, despite him holding up a press card and identifying himself as a “legitimate journalist”. For me, my trip to Strasbourg to cover the anti-NATO protests was dogged with a three-day headache and uncontrollable bouts of tiredness, symptoms I have experienced before and know to be mild concussion, after being repeatedly hit across the head with batons, when several attempts to smash my camera failed. This was on top of wearing a professional bright red mountaineering helmet with “PRESS” stencilled across the front and back. My legs above the shins ended up with two wounds, where I was repeatedly kicked and the shin pads I was wearing cut through the protective foam and dug two holes into my legs. The final attack I received was in the 5.29pm baton charge, 39 seconds into the film, on the second charge, you can see a police medic, using his baton as a stabbing implement, jabs me in the stomach with both hands.

On April 2nd, journalists trying to cover the memorial of Ian Tomlinson were then threatened with arrest by a City police inspector under Section 14 of the Public Order Act: “You have got a choice,” he announced, “you can either go away now or you can spend the rest of the afternoon in a cell. What do you want to do?”

Now, as I write this, the National Union of Journalists (NUJ) is considering legal action over this incident. 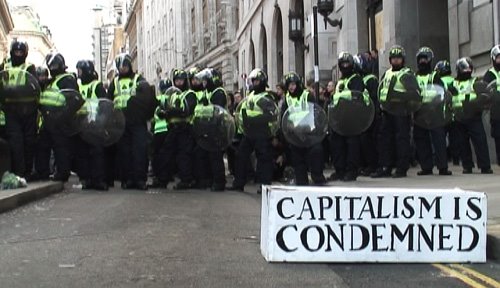 The sad fact of the matter is the violence and police tactics has yet again taken the limelight in nearly all coverage of the G20 summit. The issues being raised by protestors was mostly lost amid images of baton charges and bleeding skulls.

And the latest on the Ian Tomlinson case, as I try to finalise this blog is this. The second post mortem on Tomlinson finds he did not die from a heart attack but abdominal haemorrhaging.