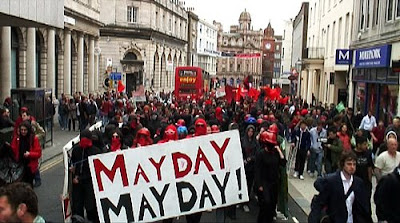 Monday 4 May 2009: A street party and protest was called in the seaside resort of Brighton by anti-militarist campaign group Smash EDO. EDO/ITT builds bomb release mechanisms for the US, UK and Israeli military. The campaign last year saw several large protests calling to shut the factory and end weapons manufacturing in the city. 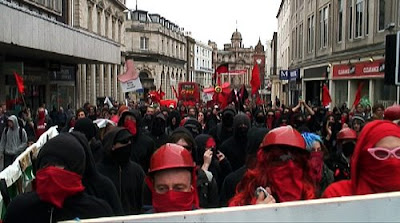 More recently, in January this year several campaigners were arrested after breaking in and decommissioned the factory, causing £300,000 worth of damage to computers and machinery. The decommissioners claimed they were justified in their actions because the Israeli invasion of Gaza, which was occurring at the time, was a greater crime than their own criminal damage. 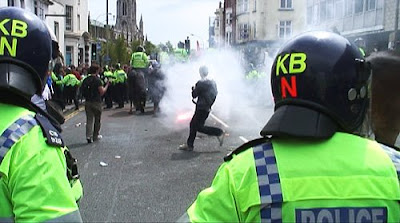 This year’s protest, the largest demonstration yet, saw some 1,500 protestors take to the streets to target all businesses that profit, invest or assist in the weapons factory day-to-day running. But when a McDonald’s fast food outlet was targeted, riot police moved in and the demonstration deteriorated into an afternoon of clashes with the authorities. McDonald’s is listed at owning 61,500 shares in the ITT corporation. 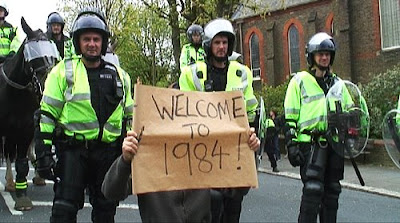 Since the protest and street party, although there was little evidence of a street party, some protestors have complained of police using excessive force and some officers not having their identifiable ID numbers visible. Other protestors have complained that some protestors were not interested in a peaceful march or the campaign, but were only intent on a street brawl with the police. That said, there is a lot of resentment from protestors to the UK police, especially the London Metropolitan police, since the G20 protests in London.

From a press angle, it was interesting to see the police leaving the press to do their jobs and respect the fact we do have some experience in these matters and know how to work around them, not get in the way and get on with the job at hand. Some protestors – from my personal experience the younger, less experienced ones – took it upon themselves to attack the press on several occassions, myself included. But when a spotty masked-up 16-year-old attempts to rush an experienced riot cameraman, the outcome can only be described as comical.