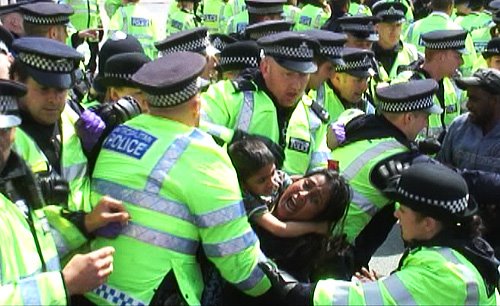 Monday 11 May 2009: Following the weekend of constant bombing by the Sri Lankan military of the Mullaivaikal “safe zone”, London Tamil protestors took to blocking the streets around Parliament for a forth time, in a desperate attempt to highlight the plight of Tamil people.

This latest protest follows months of demonstrations and hunger strikes. The Tamil protest marches were some of the largest mobilisations London has seen since the February 2003 anti-war march, with numbers massing over 200,000. 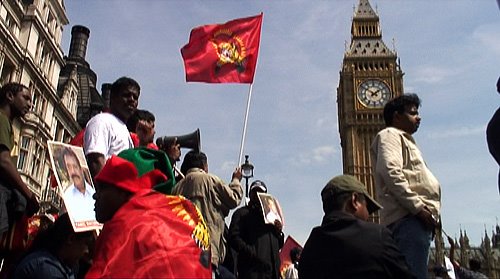 Tamil websites reported that the weekend bombing had killed more than 3000 people and another 25,000 were displaced. The Tamil news outlets and websites have also accused the Sri Lankan military of using cluster bombs, chemical weapons and have denounced the refugee camps as concentration camps. Despite a total media blackout by the Sri Lankan government video footage has come out to show what is happening in the area of Vanni (WARNING: These films are of a highly disturbing nature). 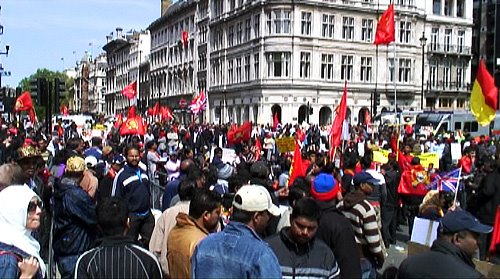 Just after 2pm the TSG and City police massed to clear the streets. What ensued, as this film will show, was total chaos. The NUJ hit out at police tactics against the press trying to document the protest. As I write this, there have so far been three complaints of assault, two occasions of journalists being threatened with arrest and spurious comments by officers on two occasions, calling members of the press “parasites”. 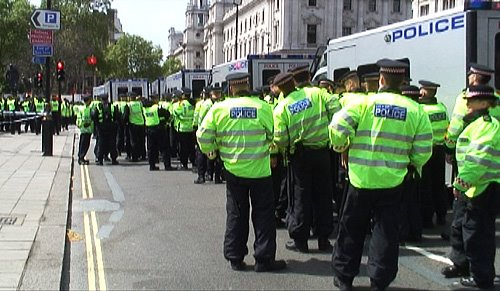 According to the press office at New Scotland Yard today, there were 45 arrests and two officers suffered minor injuries. The press spokesperson said no protestor injuries were “flagged up”. 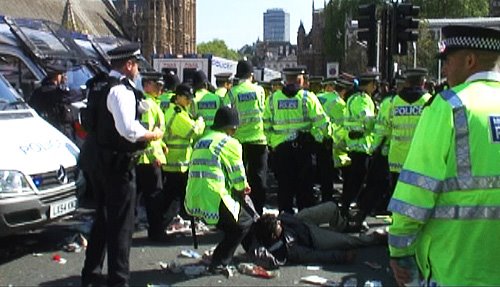 This film tells a very different story, showing clearly people being pulled from the protest unconscious and requiring immediate medical assistance. There are still unconfirmed reports of one man suffering a broken leg, but this could not be clarified today as the London Ambulance press office was closed. 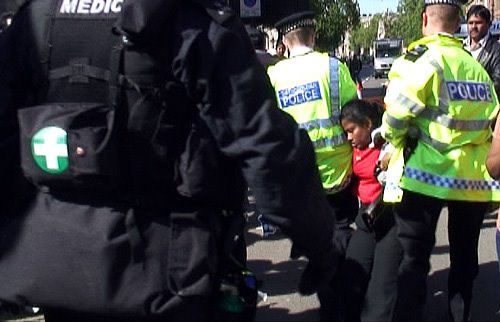 From this journalist’s point-of-view, and as someone who has spent most of his street work for the last five years covering protest, the tactics used by the TSG on Monday did nothing but cause chaos and unnecessary injury to otherwise peaceful law-abiding, taxpaying, voting UK citizens.

To anyone who looks at what is going on in Sri Lanka can see exactly why these people are so desperate and feel the need to halt traffic in order to get the media to look into their story. The simple truth, the January protest being the perfect example, until the Tamils started blocking roads no one other than Tamil TV were interested in their mass protests.

It is understandable that the police needed to open the road back up, but from my experience this was not the way to do it.

The TSG followed their usual battle plan, if its in front of you hit it with force, crush them and be damned. But when you have men and women, both young and old, children and babies sat on the road behind you, the only outcome is severe injuries and collapsed victims from being crushed within an inch of their lives. 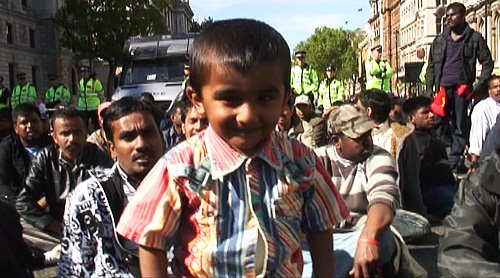