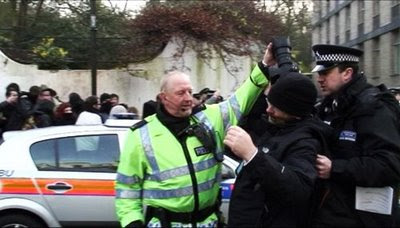 Yesterday, 28 July 2009, papers were served to the Commissioner of the Metropolis relating to an incident outside the Greek Embassy in December 2008.

The said incident occured while covering a protest following the shooting of a young Athens demonstrator by Greek police.

The footage shot that day, as protestors blocked the embassy doorway and burned the Greek flag, went live across the country within a hour of the incident via Sky News and Associated Press.

Met Investigation into Obstruction of Journalists

All material on this blog – stills, video and print – is © Jason N. Parkinson 2008. All Rights Reserved.