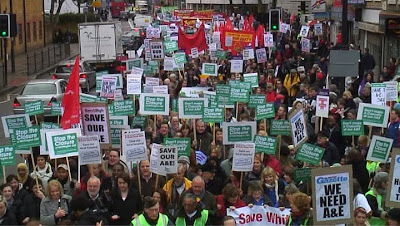 Saturday 27 February 2010: An estimated 5000 local residents in a staggering unity of community cohesion marched on Whittington hospital in Archway, North London, to oppose the closure of the accident and emergency department, which most on the protest considered the first part of the closure of the entire hospital.

This is just the latest in government (taxpayer-funded) cuts to balancing the (fake) economy. But as most vented on this day, the government has £500bn for the bankers, who continue to lie, cheat, steal and gain incredible bonuses on tax-payers money while the basic rights of every person living in the UK are denied due to “lack of funds” and “budget cuts”.

Today in Islington was just the start of mass opposition to all governments, not just those in power. It has become increasingly apparent all parties are paid for by the same financial backers and the UK public is getting to grips with that betrayal of democracy.

In the meantime the residents of Archway, Holloway and Islington try to hold on to their last remaining hospital.