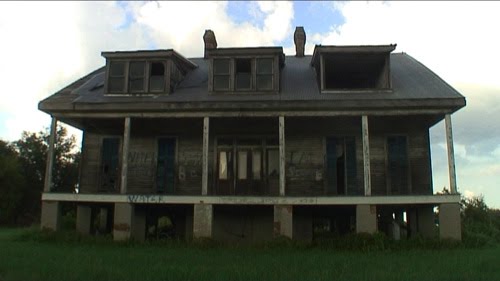 The destruction in New Orleans is what sticks in most people’s minds, but the legacy of Katrina is still visible everywhere, from the now infamous Ninth Ward, across southern Louisiana and all along the Mississippi Long Beach coastline.

In the last three weeks travelling back and forth across the four Gulf States hit by the BP oil disaster two stories have been heard time and time again from the people I have met.

People who have lived an existence entwined with nature, fishing, the bayous and the land for generations, all hold the view the levees created to redirect and channel rising waters have never worked and were never designed to deal with storm surges. The inability of the levees to deal with large masses of water, which used to flood but naturally disperse across the wide expanses of coastal bayous, did nothing but accentuate Katrina’s destructive force.

Increasing mass erosion of the Louisian

a coastline and bayous from oil and gas exploration and sulphur mining has destroyed the natural land defences that help guard against hurricanes.

The other story was of Katrina’s victims being refused payouts on property damage from the insurance companies, leaving them to repair damaged homes and lives at their own cost. Some residents now living in and around New Orleans’ Mid-City, where waters reached up to five metres deep, said they could no longer afford to have homes insured, some being refused out right no matter the cost.

Only a quarter of the people returned to New Orleans after the hurricane, the population now is still 30 percent below pre-Katrina levels.