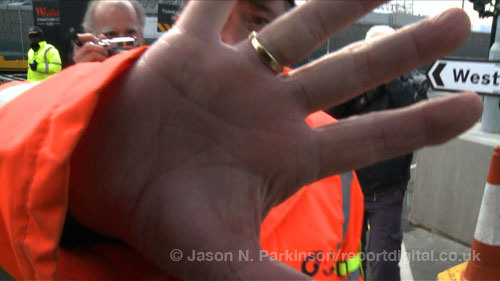 The last week has been a bit of a private security overdose. The Guardian published Saturday’s incident around the Olympic site, where G4S staff blocked cameras while attempting to stop journalists photographing and filming, then went on to admit they were told to deter people from filming the secure area, even when the photographer was on public land. The argument was made (not in the film) if it was a secure area, being able to view it from public meant it was not very secure.

Earlier in the week I was stopped twice by G4S staff as I shot the timelapse of the Olympic stadium that was in the first scenes of the Guardian film. As far as I was aware I was on public land, but there were two private security guards patrolling the streets outside the Olympic Park in a 4X4 truck.

A day before the first two stops Met Assistant Commissioner Allison, who is in charge of the national Olympic security operation, stated private security would only be operating inside the Olympic venues, not outside on the public highway, as they have no authority there.

Then there was this incident (below) occurred with private security staff employed by DEFRA, just as I had turned up to cover the Climate Rush Spring Clean protest.