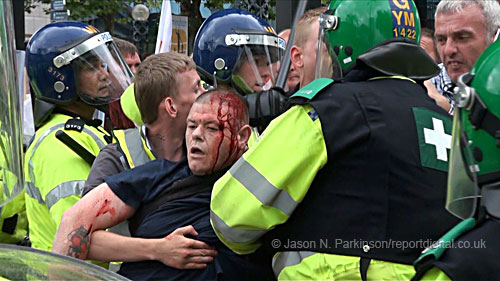 An EDL supporter suffering a head injury is removed by police medics.

20 people were arrested on Saturday 20 July as the English Defence League (EDL) in Birmingham deteriorated into violence the moment supporters left a pub and marched up to the designated protest point.

Police officers were pelted with cans, bottles, brick and stones by the 2000 strong crowd of protestors, in some of the worst violence seen since the 2010 Bradford protest. One woman was charged with violent disorder and two men were charged with possessing offensive weapons.