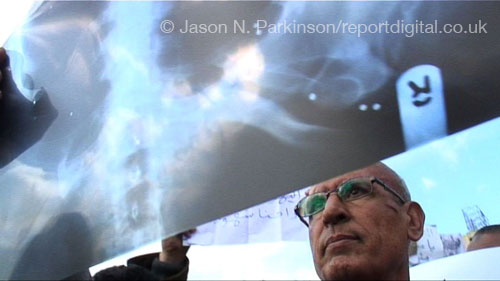 A survivor from the Day of Rage protests holds up an X-ray showing the shotgun pellets that are still inside his body.

Today sees the second anniversary of the Egyptian revolution. Again Tahrir Square is a mass of protestors, not celebrating the revolution, but calling for the downfall of president Morsi.

Twitter feeds from Cairo have reported major clashes all day and there are widespread reports of women being attacked in Tahrir by groups of men.

One year on from last year’s clashes in Cairo against the military control of the post revolution country, Egypt has seen another week of unrest after democratically elected president Morsi declared absolute rule.

In that violent week of November 2011 it was believed more than 100 people were killed, although the true figure was never known after official sources were accused of manipulating the death toll. During the 18 day 2011 uprising more than 800 were killed.