END_OF_DOCUMENT_TOKEN_TO_BE_REPLACED

The families of loved ones killed by police march from the Broadwater Farm Estate to Tottenham police station in London, to mark the fifth anniversary of the death of Mark Duggan.

The killing of Mark Duggan in August 2011 sparked the riots in Tottenham that spread across London and the country over the next five days, leaving a further five people dead.

For the second year running I have been short listed for the Rory Peck Trust news awards. In 2011 it was down to the footage shot over the first week of the Egyptian Uprising. This year it is for covering the August 2011 London Riots. The other two finalists in the news section are Roddy Hafiz for his stunning work in Cairo and Mani for his unbeleivable work in Homs, Syria.

On the year anniversary of the London riots ReportDigital got me to go back over the original footage and upload five previously unpublished video rushes from the Tottenham riots. Below is a list of the online library rushes.

END_OF_DOCUMENT_TOKEN_TO_BE_REPLACED 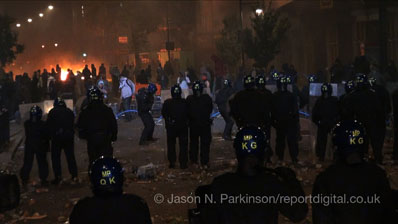 Guardian Video: Violence on the streets of Tottenham