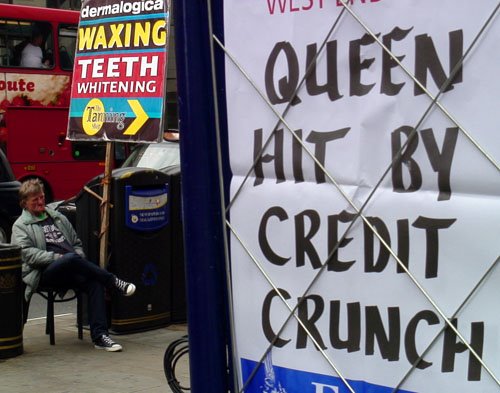 Lord help us. Terrorists? No. Climate Change? No? Another series of Big Brother, The X Factor, or any other of those brain-destroying abortions that are passed off as entertainment? No. Not even American Gladiators.

No, the Queen, our Queen, the monarch, symbol of our sovereignty, £40 million of taxpayer’s money per year – although I remember figures in 2000 being somewhere in the region of £300 million. Another 1984-style fact, rewitten and hope no one bothers to research it – The Queen, God bless her Corgi dogs, the Queen, one of the richest people in the country, the Queen is feeling the credit crunch.

This has to be one of the most rude, depraved and insulting news headlines, even by London newspaper Evening Standard standards.

It had to be a joke, to the point that when I saw the first ES stall tonight I remarked: “You gotta be fucking kidding me!”

In a time where “recession” was newspeaked to “necessary downturn” to “credit crunch”, when the average household has seen an increase in weekly costs of 40 percent, pay strikes popping up all over the country because workers can’t even squeeze a working wage out of the private corporations now in control of our public services – taxpayers expected to bail out private banks like Northern Rock to the sum of £100 million – the Queen is complaining they don’t enough have money to replace the lead roofing on Buckingham Palace.

You may have guessed by now this has really got my back up. Objectiveness out the window, I found myself today almost agreeing with certain comments by Ian Bone of Class War, for about five minutes, but then I managed to calm down . The sheer arrogance to make this statement defies belief, in any climate, let alone now.

All material on this blog is (c) Jason N. Parkinson 2008 All Rights Reserved.

That includes all stills, video and PRINT.