>Friday 1 August 2008: Frustrated at the literal wall of silence and refusal to talk to those in opposition of the Ark Wembley Park Academy, yet again, the Wembley teachers and residents under the name of Tent City Occupation took matters into their own hands and invaded the headquarters of private investor Ark in Central London. 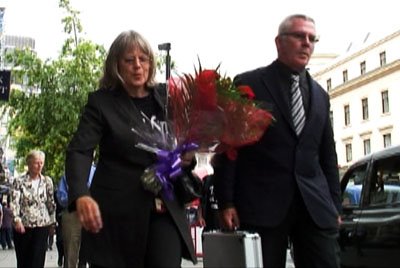 Brent NUT and ATL Secretary, Hank Roberts, demanded to talk to a representative of child “charity” Absolute Return for Kids (ARK), to which the response was call security, then the police.

Obviously the police had better things to do because they did not send anyone for over an hour. When the elevator doors did finally open, after an office occupation of over an hour, only four Police Community Support Officers (PCSO) appeared. 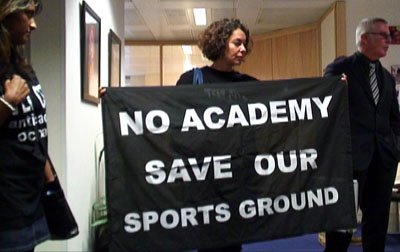 After 30-minutes a female representative of ARK did appear and Roberts tried to hold dialogue with her over the concerns of the school site – he and most other teachers believe if a private investor school has to be built it should be south of Brent where it was more needed.

Talking on the issues of school privatisation and the current eight years of evidence this journalist has compiled on the UK Academy school privatisation plan would not be heard here. So there was no point discussing it, especially not with one of the main private investors, excuse me, “charities”, in UK state education.

Roberts also mentioned the local businesses now being thrown of their work places and given no relocation as promised by Brent council, and the private takeover of one of the few remaining free green spaces and cheap sports facilities in Wembley, in a time when the local and national newspapers talk of endless youth crime and anti-social behaviour. Only last week a government-funded study finally came to the conclusion that seems to have been common sense to most of us for decades – poor social conditions, including accessible open spaces, increases youth crime. 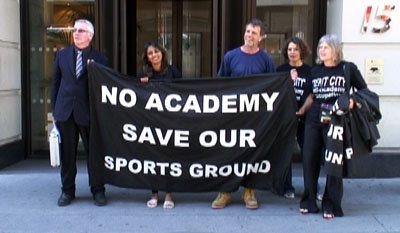 When the PCSOs arrived Roberts and the others agreed to leave, as the ARK representative exclaimed to the officers that myself and the other photographers were not journalists, adding: “They’re from that blog.”

As I personally did not have time to respond to this at the time, I’ll leave my response here, as I now know they are looking at this site to see what is being said about them, as is Brent Council.

So, for anyone doubting my credentials, you can always contact the London School of Journalism (LSJ) and find out when I graduated. You could always call some of my clients, ITN, Channel 4, More4, Sky News, Associated Press, BBC, the NUJ, or maybe just drop me a line. My email is below.

You, like anyone else, including the police, do not decide what journalism is and what isn’t, and who is a journalist and who is not. That is up to our editors and our unions.

A video of the Ark Invasion can be viewed below or on YouTube.