>
Sunday 23 November 2008: Irony is the first word that comes to mind, and it probably is the most appropriate for yet another Stop and Account under Section 44 of the Terrorism Act for a fully registered “legitimate” working journalist in the UK. 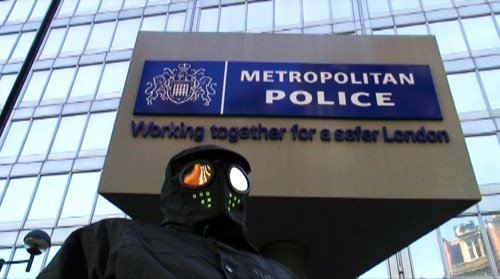 Anti-surveillance protest at New Scotland Yard
4pm: I was to be interviewed on film and photographed by a professional team from Italy’s Colors magazine on terrorism law and how it has affected UK press freedom. So what better place for the interview than underneath the New Scotland Yard sign on Broadway in London.

The team, an Italian photographer and a Brazilian videojournalist, were questioned the moment they arrived by the female officer on guard. All seemed well. No suspicion. Until I turned up, that is.

Within minutes of arriving a diplomatic police car pulled up, checked the situation and drove away. All good. Then a diplomatic police van pulled up and the two officers watched from a distance. It was then the officer on door duty moved in and began taking the details of the two foreign journalists. At no time did she explain to them, or myself, why she was doing this.

Then she turned to me, just as a second diplomatic police van arrived. I asked under what law she was taking my details and answered for her: “Section 44, terrorism act.”

She aknowledged. Her pen ran out. it was a cold day, so I lent her mine. We went through the form. A diplomatic officer stepped out the second van and listened to our conversation. I answered the questions before she had a chance to ask. She commented on my experience of such matters.

“Why? Are you wanted?” she asked, jokingly.

“Unless journalism has become a crime, no, I’m not.”

“Well, I guess we’ll see how the law changes go this week, eh.” I added, refering to the new Counter Terrorism Bill which lists section 58, terrorist crimes including the release of any information about police constable. It is still uncertain how this will be used against photographers and videojournalists who release images of police officers in their material.

I got my S&S form, the officer returned my pen. The diplomatic police remained in earshot as I conducted my interview and openly attacked the destruction of press freedom in the UK from the direct result of the War on Terror and Terror Act that strips individual freedom in return for the illusion of safety.

The only other thing to add was the officer on guard commented on how all this was a waste of time, for her and me. I did warn her that I was already wearing a microphone and we were already recording.

The NUJ-funded docu-short Press Freedom: Collateral Damage is hosted by Current TV and can be purchased here on DVD.