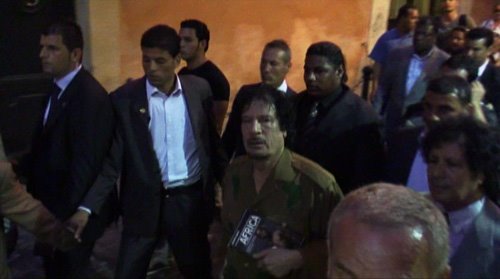 Following a day of chasing protests around Rome yesterday, Wednesday 8 July 2009, that massed to some 50 trade union members, and several hundred outside a prison demanding the release of those G8 protestors inside, we had about given up on the left-protest movement.

Returning to the city centre our team spotted two helicopters, then police vans massing, then cops and hardcore private security.

From the heavily guarded book store emerged Colonel Gaddafi, a book on Africa under his arm. From there, still surrounded by security, he took a stroll through piazzas and the back streets of Rome.

The question is, why is Gaddafi in Rome the same time the G8 is meeting? Conicidence? A bit of light shopping? Or is the war on terror ally here for another reason?