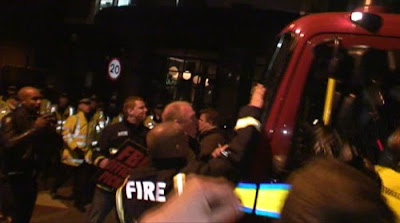 Monday 1 November 2010: London FBU NEC member Ian Lehair was run down on the picket line by AssetCo striker breakers at the LFB training centre in Southwark, London, where the private company was storing fire engines. He was treated at the scene and appeared to be suffering injuries to his chest.

This was the fourth of such incidents in one day. Earlier in Croydon a picketing fire fighter was run down, with a second fire fighter and a police officer being hit by trucks in Southwark.