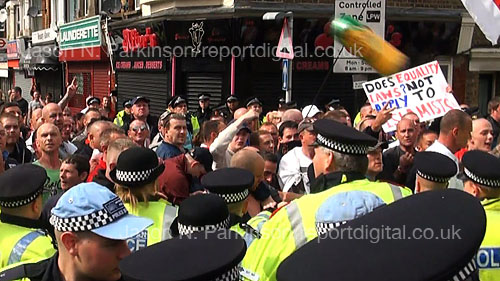 Saturday 1 September 2012, the English Defence League (EDL) attempted to march through Walthamstow in North East London. The local community and anti-fascist protestors marched in their thousands and blocked the EDL march by sitting down in a major road junction leading to the town hall. Beer cans, bottles, coins and fireworks were thrown, as clashes between the 300 EDL protestors and police broke out on the march to and from their attempted rallying point. The rally was called off by police after a large group of antifascist protestors pelted the EDL leadership with sticks, bottles and rocks. There were 20 arrests in all, nine EDL and 11 counter demonstrators.

The Counter demonstration arrests were 6 affray, 3 possession of offensive weapons, 1 public order offence and 1 breach of the peace.