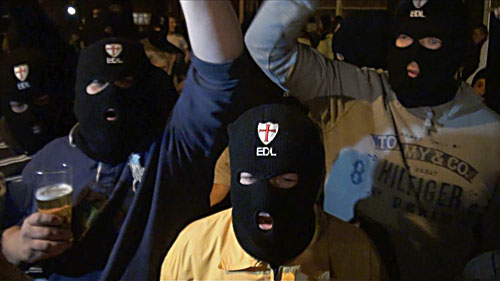 Following the murder of soldier Lee Rigby the UK has seen increased attacks on Muslims. There has also be a surge in support for the English Defence League (EDL).

Support on the main EDL Facebook page rose from 22,000 before the Woolwich murder and currently stands at 133,000.

Recent EDL demonstrations have also seen numbers increase. On 25 Saturday May several thousand marched through Newcastle, clashing with police and anti-fascists. Aggression against journalists was very prevalent that day with four reported attacks, including one photographer being repeatedly punched n the face.

Two days later on Whitehall in London around a thousand gathered opposite Downing Street. Again clashes broke out with police as the EDL tried to get to anti-fascist protestors.

On the eve of the Woolwich attack the EDL mustered several hundred at short notice and clashes broke out as they tried to march to the scene of Lee Rigby’s murder.