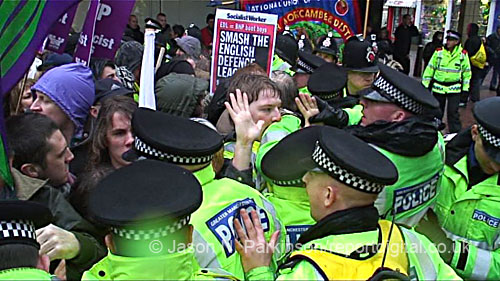 After a tough seven month case, on 17 April 2013 the Bolton EDL/UAF production order case against me came to its conclusion.

The court order forced me to hand over five minutes of footage, half of which was already published. Greater Manchester Police (GMP) had originally sought all footage shot over two hours. Most importantly, GMP are not allowed to use the footage for any other case, or retain in any form after the investigation. They also agreed to pay the costs of the case, already in the sum of tens of thousands of pounds.

Back in September 2012 GMP began proceedings to seize all footage shot “between the hours of 1030 hours and 1230 hours” on the 20 March 2010 Unite Against Fascism (UAF) counter protest to the English Defence League (EDL) demonstration, that saw more than 70 anti-fascist protestors arrested.

Through the National Union of Journalists (NUJ) legal team, we repeatedly asked questions to GMP, questions they were obliged to answer according to the law. No details were “disclosed”. They wouldn’t even reveal what the investigation was about.

Following 18 months of increased police seizures of journalistic material across the UK, in 2011 Essex Police served a production order on all broadcasters and me, demanding all footage shot over the first two days of the Dale Farm Irish Traveller site eviction.

1: The order was for all footage shot over two days, with no specific incidents of criminality highlighted. This is what Judge Moses referred to as a police intelligence “fishing expedition”.

2: The police had failed on every level to “disclose” their evidence and information, as is required in a production order application under the 1984 Police And Criminal Evidence Act (PACE).

For four months GMP was silent. I was dragged into a Manchester court in February 2013, only for the GMP barrister to call immediate adjournment, in order to “disclose” the relevant information – the very questions we had been asking for four months.

The police barrister had taken one look at the Dale Farm high court ruling and realised they had made a major mistake.

GMP finally “disclosed” the required information in March. Only then did the NUJ learn the investigation was relating to a charge of “perverting the course of justice” against a police officer. It was alleged the officer punched a protestor, a Mr Clough, then led the arrest on Clough, accusing him of threatening behaviour against a police inspector. Clough was charged, but helicopter footage shot by Granada television was seized by police in 2010 proved this did not happen. The charge was then dropped against Clough.

This was the fundamental difference between the Dale Farm case and the Bolton case. Essex police never disclosed any information. That production order was ruled unlawful, a “fishing trip”. If they had disclosed specific incidents of their investigation the Dale Farm case would have never made it to the Royal Courts of Justice and myself and four major news broadcasters would have been forced to hand over the material or face “contempt of court” charges and lengthy prison terms.

GMP disclosed there was a gap in their footage and believed my footage was likely to hold additional evidence.

This put me and the NUJ in a very difficult position. If GMP came after the full two hours we would still oppose it on the same grounds as Dale Farm but possibly faced losing the case because GMP had now “disclosed”. If GMP only came for the incident we would lose outright if we opposed the order. I could face up to five years in jail for contempt of court for refusing to comply. The police would gain a search warrant, enter my premises and not only take the footage they required, they would take everything, claiming I may have hidden something elsewhere.

At the last minute GMP revised their order to cover only five minutes of footage around the brutal arrest of Mr Clough, half of which was already published. The unpublished footage, known in the trade as the “handles” was the useless material, “shaky cam”, the cameraman being knocked about and the police blocking the lens – something that happened a lot on that morning in March 2010. If there had been anything of interest in the unpublished footage, it would have been published. Still, GMP insisted they wanted it.

We then fought to get GMP to agree not to retain the material in any way once the investigation into the conduct of the police officer was over, making sure the material could never be stored on a database and used for future police intelligence needs. GMP agreed to this.

This was the first time the NUJ had fought to stop material being retained, an issue we decided to fight specifically because of issues raised during the Dale Farm case. Judge Moses had questioned what happened to seized journalistic material once the case was over. Essex police were unable to give him an answer, because there was no answer.

Nowhere in PACE law is the retention of seized material addressed. PACE was written decades before our current technological ability to retain huge amounts of data on databases. This is what Judge Moses referred to as a “legal black hole”.

Although no precedent was set in the Bolton case, getting GMP to agree to not retain the material will certainly assist other journlists caught in similar circumstances in the future.

The bigger problem now, by using the Leveson inquiry the Met police have called for changes in PACE law, to make it easier to obtain journalist material. The whole argument surrounding the seizure of two days footage from Dale Farm and the attempted seizure of all footage shot over two hours in Bolton will no longer be an acceptable legal argument against production orders. Journalist material seizures will become a mere legal routine of court order applications and little to no grounds to oppose them. The protections journalist material has had in the past under PACE Special Procedure Material will no longer exist. In essence, following the Dale Farm defeat in the High Court the police are now attempting to make the unlawful, lawful.