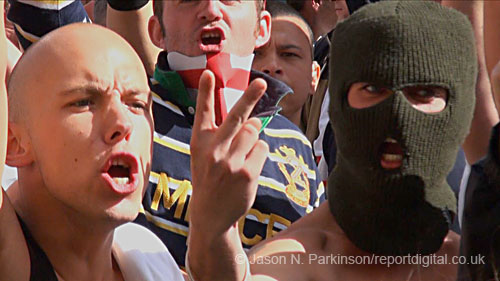 On Saturday 7 September 2013 about 500 English Defence League (EDL) supporters tried for a third time to march through Tower Hamlets. Clashes broke out when EDL protestors tried to break through police lines to get to anti-fascist groups.

The police banned the EDL from entering Tower Hamlets, only allowing them to march across Tower Bridge and as far as Aldgate station. A rally was held outside the underground station. Police also imposed restrictions of 30 minutes on the rally, but this was ignored by the EDL leadership.

14 EDL protestors were arrested, including leader Tommy Robinson for breach of bail conditions.

280 anti-fascists were mass arrested for breaching section 14 of the Public Order Act and removed from the area on comandeered public transport buses.