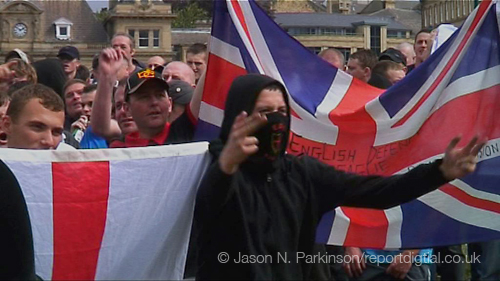 Tomorrow will see the English Defence League (EDL) return to Bradford in Yorkshire. This comes at the end of the week where the leaders of the far right street protest group resigned in a joint agreement with the Quilliam Foundation. It is reported that in all 12 members of the leadership resigned.

During the press conference EDL leader Tommy Robinson said he was leaving because he could no longer keep the racists, fascists and Nazis out of the group. The Q&A of the meeting was dominated by the press trying to hold him to account and apologise for his public Islamophobic statements.

Since the resignations an EDL committee has been set up, comprising of all the regional leaders, that will take control of the groups organisation and decision making.

In August 2010 the EDL protested in Bradford under the title, “The Big One”. Just a month after their third attempt to protest in Tower Hamlets, dubbed “The Return”. Now the EDL plan a return to Bradford, this time without Stephen Yaxley-Lennon (AKA: Tommy Robinson) or his cousin and deputy  leader Kevin Carroll.