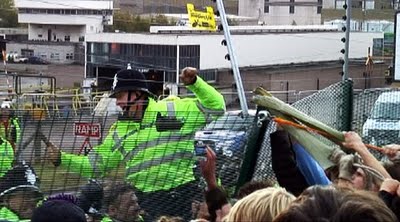 Saturday 17 October 2009: The Great Climate Swoop descended on the Ratcliffe coal-fired power station in Nottingham with the intention of shutting it down.Using direct action the perimetre fences were breached and pulled down on many occasions, and protestors entered the site, despite the heavy police presence.

52 people were arrested that day. One protestor and three police officers were reported injured, one seriously.