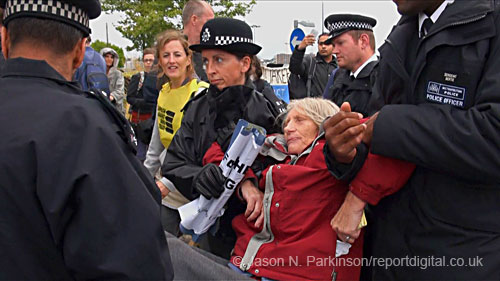 Sunday 8 September saw the start of the protests against the biennial DSEi London weapons convention. The first day saw several hundred protestors block several entrances to the Excel Convention Centre in East London, to disrupt the delivery of equipment for the arms fair. Police arrested at least 10 protestors for blocking a public highway.

Tuesday was the opening day of the convention and I spent the day filming for Ruptly inside the event.

Thursday morning 11 September, as I returned to the convention to film for a second day, I filmed a rooftop protestor at the Prince Regent entrance to the Excel Centre. I was then detained along with my field producer in the media office for 30 minutes by very panic-striken event organisers, back up by several suits with white ear pieces. Eventually two people arrived, the man would only identify himself as James. We were told our press credentials were revoked and we were barred from the weapons convention. When asked why, I was told it was for using the hashtag #StopDSEi while posting out links to our coverage of the arms fair and the protests surrounding it.

Ruptly: NLAW first anti-tank missile that anyone can use