END_OF_DOCUMENT_TOKEN_TO_BE_REPLACED

Wednesday 5 November saw the biggest Million Mask March London has ever seen in the three years since its inception. Thousands of protestors poured down Whitehall to Parliament Square, which has been fenced off since the Occupy Democracy protest turned walking on the grass into a revolutionary act.

Ten arrests followed clashes, as protesters tore down fences and tried to reclaim Parliament Square for the democratic right to protest, moved on to Buckingham Palace to show disgust for the monarchy and then on the central London studios of the BBC, where the public funded news and television organisation was criticised for its news coverage and accused of covering up the Jimmy Savile child abuse scandal.

END_OF_DOCUMENT_TOKEN_TO_BE_REPLACED 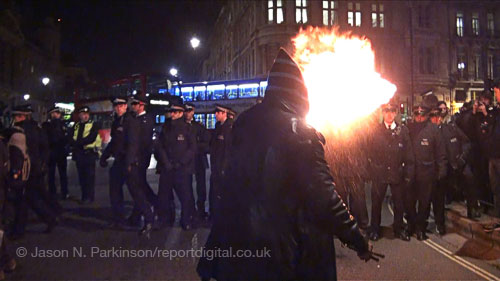 Monday 5 November 2012: Anonymous protestors clashed with police outside the gates of the Houses of Parliament during a worldwide day of action called against banks, corporations and politicans.